pic: From Chargers to Cubes 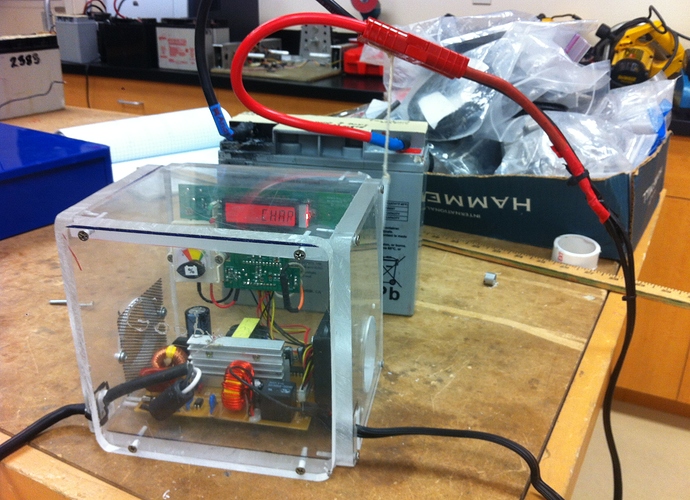 Nothing really new or creative, but we stripped our old chargers and remade them into more stack-able cubes to put on our new, soon to be created battery cart. I prefer to call them battery cubes, even though they do not, in fact, contain batteries.
Toa_Circuit January 1, 2019, 10:10am #2

What charger is it? (I’m now considering doing this to our KOP chargers…)
How thick is that plexi? :yikes:

It’s just a simple Black and Decker 10 amp charger if I recall. We actually are right now working on putting small LED’s inside the plexi-glass to light it up. But the plexi-glass itself is actually the type used at hockey rinks. We went to a local ice rink where they had shattered pieces that they were willing to give away, that we used for a different project. This was made from the left over pieces in our shop.

It’s just a simple Black and Decker 10 amp charger if I recall.

I would be careful about 10 amp chargers, if I were you. I know that anything above 6 amps is notorious for degrading battery performance. They might even be illegal.

I would be careful about 10 amp chargers, if I were you. I know that anything above 6 amps is notorious for degrading battery performance. They might even be illegal.

There is no legal battery charger as defined by the rules. Inspectors will be on the lookout for potentially unsafe settings and make recommendations.

The biggest concern would be the building power circuit amperage limit, especially at a district event.

There is no legal battery charger as defined by the rules. Inspectors will be on the lookout for potentially unsafe settings and make recommendations.

Not quite. The rules don’t address chargers, but the manufacturer does. More than 6A isn’t recommended, and inspectors will ask you to remove chargers that push more than that. See point 4 in http://www.chiefdelphi.com/forums/showpost.php?p=1352700&postcount=80 We won’t recommend you change settings, we’ll tell you to remove unsafe chargers.

The cube looks cool, though. If you take the cases off legal chargers & put them in the cubes you’ll need to retain some kind of spec sheet about the chargers so your inspector can verify they’re legal. One question I would have (and don’t have an answer for) is “does removing the case somehow render the charger unsafe?”

Okay so checking the charger, it’s only ever outputting 6 amps. And we do have some spec sheets of the chargers printed out that we’ll have with us. As for the question on saftey, I dont believe taking them out of the cases did anything to the safety of operation. The cube it’s in is completely not conductive and ventilation is retained as if still in the case, so I couldn’t think of an safety issue arising from case to cube. Although if anyone thinks of any problems that this setup could cause please be free to mention it.

I personally don’t see a problem with it, I think it is a fun way to make a charger look more interesting. And I like that you included the fans to maintain the active cooling that was in place on the original charger.

The only issue I could see would be the fact that removing the case modifies the product and can negate the UL certification on the whole assembly.

We ran into issues with this on our charging system because we have two chargers that charge four batteries. We had to prove that the fuse protection and wiring was up to standards and the switches we used were rated for the current draw. All of this while the pit electricity was running through an unsecured overhead connection with exposed contacts that was hanging from the ceiling and running to a breaker panel that was locked shut :eek:

The cubification into power cubes does not reduce safety in my opinion, although it surely does remove the UL approval :ahh:

Definitely bring the spec sheet with you, since at the Week 1 event I was at, teams were asked to not use their >6A chargers.