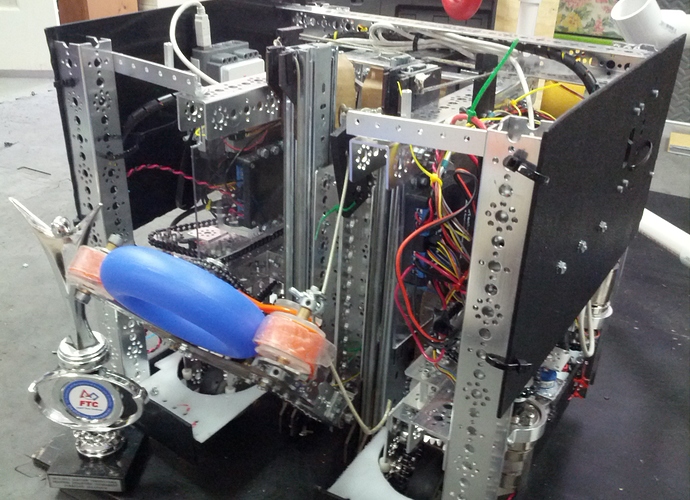 This is FTC 4977’s 2012-2013 Ring It Up robot.
The trophy beside the robot is for being on the finalist alliance at the Eastern PA Qualifying Tournament. ( Our first event of the season! )

Lift/Manipulator: The manipulator is a roller claw that picks up off the ground, and moves up on a cascade lift.
Drive: The drivetrain is a 4 wheel swerve, with the left and right sides chained separately.

We feel this was a good start for us, and we’re working on some modifications to be better at our next event.

And here I was thinking that an FRC type robot would be impossible in FTC. Scale that thing up a bit, rotate the roller claw 90°, and you probably could have done well in either Rack N Roll or Logomotion. Impressive.

Can we get a video soon?

It looks so awesome and I’d love to see an FTC Swerve:)

I’m glad people are finally doing swerve drives and crab drives. Seriously I’ve been trying to get mind competition ready for about 3 years now. Never got the chance to do it fully.

Mind if we get another angle of just the swerve? If I’m seeing it correctly, looks like you pulled off a coaxial swerve in Tetrix parts.

Mind if we get another angle of just the swerve? If I’m seeing it correctly, looks like you pulled off a coaxial swerve in Tetrix parts.

Yep, it’s all Tetrix parts. The swerve modules were our summer project, and we designed them to the 2011-2012 rules. It was originally independently driven and steered, with servos as the steering motor, but the rotation response was so awful we switched to motors.

Here is a photo from another angle: http://i.imgur.com/66Ube.jpg

Very nice! Is that a roller claw? How do you get the rings off the dispenser?

Probably position the claw under them and suck it in

The swerve modules are all Tetrix components. The modules were our summer project, and were build to be legal with the Bowled Over rules. We’re working on a revision that takes advantage of the new part allowances in the new rules

Also, I made a post with this image earlier and it didn’t seem to show up… sorry if this becomes a double post.

In autonomous, we have a small flap that folds out when the robot drives forward. All of the rings get pushed onto the ground and we pick up off the ground.

For releasing the rings on the pegs, we just pull the lift down while the ring is on the peg.

Some more detail on the roller:
The belts themselves are McMaster “flat urethane belting”. The surface is fairly slick, so we ended up coating the rollers with tape. This was mainly a “quick fix” to get us through the first competition. We plan to find a more long-term option that holds the rings better.

Was I the only one thinking they meant an actual black box? -In aviation, a “black box” (they are actually bright orange, to facilitate their being found after a crash) is an audio or data recording device in an airplane or helicopter. The cockpit voice recorder records the conversation of the pilots and the flight data recorder logs information about controls and sensors, so that in the event of an accident investigators can use the recordings to assist in the investigation

In autonomous, we have a small flap that folds out when the robot drives forward. All of the rings get pushed onto the ground and we pick up off the ground.

Curious. How does your alliance partner take to that? Do you clear all the rings or only certain rings?

Curious. How does your alliance partner take to that? Do you clear all the rings or only certain rings?

For most partners, it’s fine since we only clear one “peg” on a dispenser in autonomous. If the partner insisted on having both pegs of the dispenser full on our side, we went to our other dispenser and cleared that one in teleop.

In the future, we may consider changing to a “bucket” style pickup but for our next competition we’re sticking with the roller claw.

Fwiw, I think that going with a roller claw, and extension to active manipulation, is brilliant and will set you apart from other teams. Active manipulation (read: floor pickup) in this game, from what ive seen, is rare but allows you to not be limited to just what’s on the pegs and allows multiple tries per ring, if needed

That module is HUGE, but I like it. Did you guys do any CAD at all? Also any video?

Here’s a video from one of our matches.

The PID tuning on the rotation motors is still a bit rough, which causes some of the left and right misalignment you see.

what language did you guys use to program this ? and is there any cad of the swerve modules ?

what language did you guys use to program this ? and is there any cad of the swerve modules ?

I’ll talk to the mechanical guys about getting the CAD up - the modules were CADed, but most of the parts were COTS or made with drills.

The modules shown in the picture were made with 100% Tetrix parts - don’t do this if you can avoid it. We switched the side plates of the modules out for stronger plates and it vastly improved the performance and rigidity of the modules.

Our CAD work, along with everything else the LANlords have created in Inventor over the years is available at GrabCad.

Link to the swerve modules here: