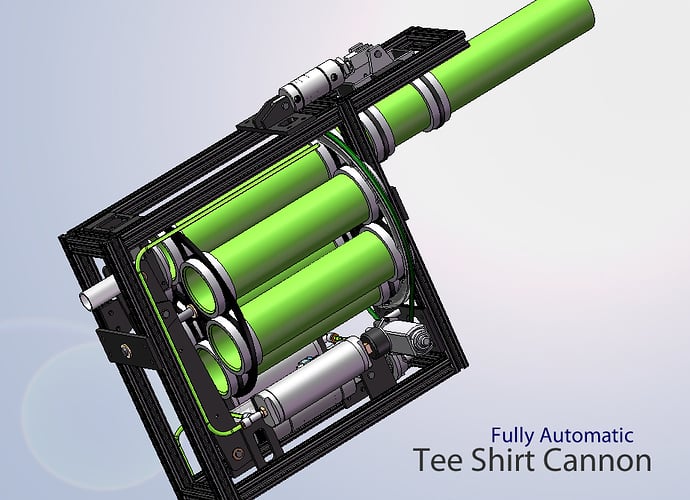 And yes, I know about the pneumatic tube that goes nowhere.

Wow, I sure hope you guys don’t build that. Otherwise we’ll have spectators ducking for cover in a very Aim High-esque way as they are bombarded by T-Shirts. However, it would be absolutely hilarious, so if you DO build it, take a video.

Art, you are crazy. I am consistently impressed with the projects you do in your free time.

Now just to fabricate it, eh?

reminds me of a nerf gun

that’s one heck of a 6 shooter!

Whats up with the tube going to nowhere? J/k. I really like it though. It’d be awesome to see

Wow, nice job! Any chance you could post a close up on the mechanism that seals the chamber to the barrel?

Pictures from different angles would be nice. I do hope you guys build this, it looks freakin’ sweet!

So…Art…when can I purchase one of these babies?

Thanks for the positive feedback!

It seems my first picture for some reason never made it into CD Media, where I had a long description of the robot and mechanism and a shot from another position. Oh well…

Anyway, this tee shirt launcher will be mounted on top of the Mountain Dewbot (now with a lot of modifications) that I built last year for Mountain Dew. (The top “can” on the robot will be about a foot shorter, and the sound system inside it is now a full-blown car stereo system, with a 4x increase in the audio Wattage!)

This was a test of concept air cannon my father and I made last summer, with about $80 of parts from Home Depot. With that in mind, I decided to do with this air cannon what I always do when designing stuff… and hence, we get this.

This, is the mostly completed CAD model for the new gem on the robot, the tee shirt launcher. I designed and CAD’ed this entire mechanism in about three and a half days. Since I only have about twelve to fifteen days to fully manufacture it, I wasn’t able to design as much CNC milled parts as I would like. (Setup and probing would probably take longer than just making many of these parts manually…)

The vast majority of the brackets were design to be milled on a manual mill or a person with tight tolerances on a drill press, and 80/20 was chosen as the structural member in place of fancy milled aluminum plate.

Because this mechanism was designed to be the key feature on a public relations robot, I had to pay a lot of attention to detail and looks, as well as making it functional. A lot of the parts will be spray painted glossy black (I would have preferred powder-coating, but again time is my enemy), with a few parts left as lightly sandblasted aluminum finish. The barrels are going to be spray painted a bright green, with a clear stripe left along them to tell from the side if there is a tee shirt in that barrel.

The tubes are UV resistant Lexan for safety reasons, since they are rated for 9000 psi. There is a rubber O-Ring and chamfered ends of the shafts to ease the transition between the different sections.

The accumulators you see are only for the pneumatic cylinders; they are on a check valve to ensure right after a launch there will be enough pressure there to at least open the cylinders to advance the to the next barrel while the system recharges. There is one (2" bore, 2" stroke) on a 4:1 leverage arm to push the rear plug into the barrel cassette. The top one on the extender is a 1.5" bore, 0.5" stroke. There will be a third 0.5" bore, 0.5" stroke (not yet pictured) to “snap” the cassette into position to ensure everything is lined up.

The main accumulator is a 3" diameter, 18" long aluminum air tank (not pictured), with 1" pipe/tubing between it and the barrel. System recharge time to full 120 psi launch pressure is about 90 seconds with a KoP compressor.

Now, onto some more pictures!

Note: I had all the mates in Solidworks correctly to simulate the linear motion for the linkages, however the pneumatic cylinders have yet to be mated, so none of the motion is currently simulatable

And oh yeah, I didn’t model any of the fasteners or e-clips. Oh well, I know from the hole size what my original intent was. ;-).

Note: in this slot the delrin linear sliders are a bit shorter than they will be on the finished robot. Trying to keep costs down, the assembly as shown only used a single foot of 1" x 1" delrin. But I’m worried about torque from the pneumatic cylinder causing this piece to jam, so I’m going to make it longer.
http://img299.imageshack.us/img299/5789/img1la2.png

Looks dangerous…probably should get built sometime.

Awesome! I hope you build that sometime!

It looks like you’re using some kind of motor to rotate the barrel carriage. Any chance of turning that into a pneumatic escapement mechanism of some kind? It would be some awesome to hear that thing run soelly on pneumatics!

Also, it would be awesome if you put enough reservoir tank on this machine to fire off a full battery of T-shirts before recharge… one five gallon tank should be enough.

By the way… when you build this thing… you should get Mountain Dew graphics for all of the barrels to make them look like cans of mountain dew!

Power it with a CO2 tank and you will have a monster!

first, this looks like an awesome project, good luck!

second, 80/20 makes linear slide bearings (so you don’t have to make them yourself)

You’ve done your homework here; excellent job. Adding a “can’t wait to see it” to the stack.

lol that would be so cool

Now you need to have some manpower to put your shirt on chain links… and an auto feeder to reload the empty chambers… and finally a large ammo box to store the shirts.
Don’t forget your safety goggles

A note on using CO2 tanks to power t-shirt cannons as mentioned above. Team 1726 tried this with little success for several reasons. CO2 regulators tend to be low flow and the conversion of CO2 liquid (in the tanks) to CO2 gas (which shoots the shirts) is highly endothermic and will chill the tank to the point where no more CO2 will flow very quickly is used repeatedly. Compressed air is a much better solution.

So… how much are these going onto the market for. I would love one of these. (evil laugh):ahh: