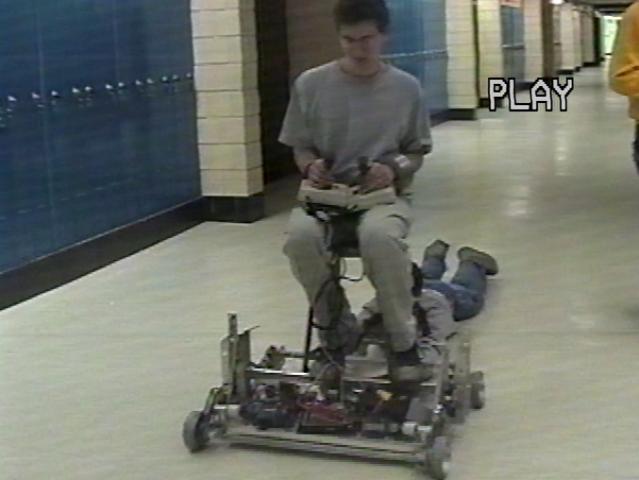 This is the drivetrain from team 38’s old robot, with a science lab stool tie-wrapped on, and out for a cruise. Makes for a great ride around school, and the blank stares you get from people are well worth the humiliation, especially when people start clinging on for the ride…

Sorry about the bad quality… it’s a screen grab from a 2 second long video clip, and the only documentation that this actually happened.

Looks like fun. I plan on strapping a chair or something to our 2003 robot, and probably some ground effects for attracting people onto the team next year.

Heh, we did the same thing once, but tied our cart to the back and sat on that. Driving the robot is hard enough, nevermind with a trailer in tow.

Unfortunately for us all our old robots have been dismantled and scrapped due to lack of storage space for them. It would have been neat to have them all running still except for the '99 year. Back then you used to have to send back the control system to FIRST when you were done competing for the year rendering the robot inoperable.

Actually, this particular robot was destined for a trash dumpster, electronics and all. After we lost our sponsor, we had to clean out our old space, including old robots. There were only a few of us there to clean up, and no one was willing to give these fine robots a home. I couldn’t let the first robot I’d helped build end up in a trash heap, especially with a complete control system. I took it to school, and fixed it up in my office (I was the AV nerd of the school, so they gave me an office), and rode it around the school (so yeah, that’s me driving it).

It actually worked quite well, I used it a few times to move our big TV production cart around the school, to set up for live broadcast events on our school’s community access cable channel. Tied a rope from the back of the robot to the side of the cart, and drove away. Good times.

What does everyone else do with their old robots?

Right now our last 4 (Buzz 6,7,8, and 9) are at school for recruiting efforts. We drove them around after a choir concert, and they are on display to get kids to join the team. Normally, the old robots starting with Buzz 5 are on a display at DaimlerChrysler. We used Buzz 5 for coding for his year’s robot, and we built a mini elevator on Buzz 6 last year to practice stacking. Buzz 4 (Mugzy) is in a crate upstairs in our storage area because the body panels and electronics are gone, so it’s basically just metal, not good for display. Buzzes 1-3 are long gone.

Our 4 robots are still intact. Our rookie bot (2001) Clark Kent has a bent arm shaft and broken wheel hubs and I believe is lacking an RC. The 2002 robot Viper is missing a drill motor and it’s chassis is falling apart due to loose and missing hardware. The 2003 robot Heather I believe is all there and functioning, although it has some pretty good battle scars. The 2004 robot with no name (I call it G2, some call it RJ) is in near mint condition and I hope it stays that way - it is our coolest one.

Actually, this particular robot was destined for a trash dumpster, electronics and all.

I’m sorry if this comes out harsh but what IDIOT throws away a robot!?!?! If I ever hear of this again, I’m catching the next flight to wherever that trash bin is.

I took it to school, and fixed it up in my office (I was the AV nerd of the school, so they gave me an office), and rode it around the school (so yeah, that’s me driving it).

We did the same thing with our 2003 bot - bolted a legless chair to the base, hooked up an old Atari joystick, wired in another two batteries in parallel, and drove it around the school… Taking rides on that robot really made us appreciate all the trouble we took in the programming during build to make it drive smoothly!

All our other robots are in various states of disassembly, except for our 2002 bot - we keep it around because there is not much that impresses non-FIRST people more than a robot shooting a soccer ball 40 feet.

Out of out 5 robots…one is totally disassembled, one is basically just the frame, another hasn’t moved for a year or two, and the ones from this year and last year are still very well intact. Of course, those would be our two most successfull robots.

I’m sorry if this comes out harsh but what IDIOT throws away a robot!?!?! If I ever hear of this again, I’m catching the next flight to wherever that trash bin is.

I completely agree, which is why I salvaged it

I guess it was because no one had room for it. I originally just wanted the control system, but I figured heck, it’s my rookie robot, and it’s a functional drive train :yikes:

There is another half of this robot, the ball collection box. Another member took that and was using it as a coffee table for a while (it was big, and of that shape).

I have our '99 bot too, but it’s far less functional, lacking a control system and all the victors were scavaged years ago.

Rowdy 1 and 3 are completely ripped up

Rowdy 1 (the 2000 robot) was salvaged for 2 speed controllers back in 2002. It is now completely dismantled and the frame (one of the two we welded) is in Auter’s room.

Rowdy 2 is still in use and we show it off to junior high kids to recruit them.

Rowdy 3 was ripped apart after it lost IRI. we salvaged its speed controllers too.

Rowdy 4 is still there, although modified from IRI

Rowdy 5 is back home in Indiana, and will be worked on this summer for IRI and Ford Sweet Repeat. It will be dismantled over my dead body. It is too great of a robot to break.

One time (I was a freshman then) we had a convo to show off Rowdy 2 to the junior high kids. As you know the 2001 game, it featured 8 ft high, movable goals, a center balance, 3 big balls, and several small balls. Rowdy 2 was a big ball capper and balancer (although the balance didn’t work well). There was one extremely annoying 7th grader in the seats [he would make Buddha want to kick his butt], who was sitting in the aisle row. there was a big ball at the front of the auditorium, so I picked it up, took the arm up 8-9 feet, and dropped it on his head. He got Po’ed and it was pretty funny.

We only have 2:
the Iron Gremlin is getting a chair.
the Glass Gremlin is staying together (It’s a cool all-around bot)

Everyone but the rookies should be able to do this: Everyone has 2 control systems! (With up to 4 controllers!)

All of our robots are intact but the thing is, is that they have no motors… hmmm that could be a problem… Well hopefully we can get one of our old robots up and running even though in the 2003 offseason competition (stack attack in Lebenon, NH) we used 2001 and 2003 robots… They were awesome!!!

I think we should get some old robots, hop on them with the control system in hand, put some shiny armor on, then go jousting in the hallways, we have enough robots in our classroom to do at least 3 people at a time though 2 is usually how jousting works. Anyone else have ideas what we can do with past robots like that?