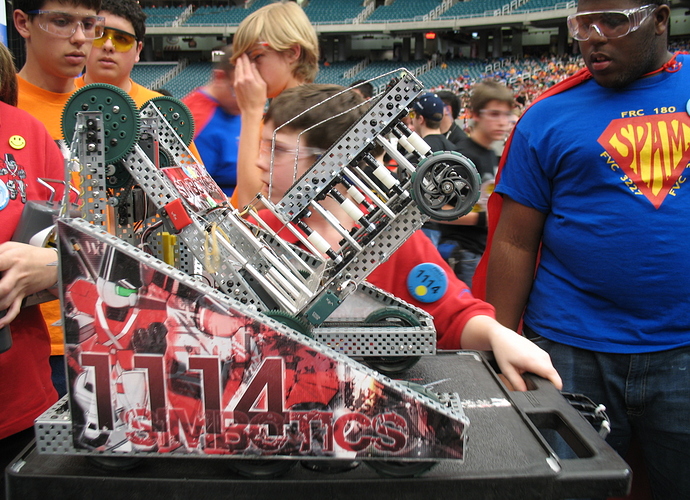 Now that the season is long gone, here’s the best picture I have of 1114’s robot in Atlanta.

When John V-Neun said “Nobody gets two, until Beatty gets five”, I can only guess he was excluding FVC–because 1114’s definitely gone and done it.

This was definitely one of the greatest vex robots of all time if not the greatest. The design was simple and effective and it seems as if the robot was perfectly constructed with minimal failure points.

I believe that this will be the FVC programs 02 beatty.
Example “I want my teams bot to own like the '07 1114 machine”

All suck up comments aside, this is my favorite Vex robot to date.

This was a great 'bot. Period. In Atlanta I would stop by the FVC field to see how our two teams were doing, and in almost every match I saw this 'bot dominated.

Also made a great alliance partner for one of our teams (FVC 3230 who are the kids in orange in the background) in the finals. Thanks 3053 for picking them!

It wasn’t just the robot that made their team so great. As soon as alliance selection was over their coach and our coach discussed game strategy. They had thoroughly thought out how to win the game and even had a diagram of the field with an erasable overhead projection sheet ontop so it could be drawn on. I wasn’t on the drive team, but our drivers and coach said afterwards that they communicated extremely well during the competition. It was a pleasure competing with them; I’m still suprised no one picked them before us (we were fourth seed).

Thanks again for picking them!

Our team picked them. Everyone (including the referees) kept thinking that 1114 was the alliance captain.

Our team picked them. Everyone (including the referees) kept thinking that 1114 was the alliance captain.

Thanks, and your FVC team was a pleasure to work with as well. One of our drivers got a kick out of you guys being sponsored by Hooters.

I think everyone assumed 1114 was the alliance captain because they played in both the first and second matches of each elimination round. This was a testament to how good their robot was. Our team quickly and unanimously decided that their robot was better than ours, and so even though we were the alliance captain and could chose to play our own robot more, it was foolish to do so.

This is assorted matches from elimination rounds. It was a video recording of the large screen…so the quality isn’t too great. The YouTube video shows three matches. The first and third matches have 1114 in it.

Congratulations again to FVC 1114 on quickly picking up their second FVC Championship (they’ve only been around two years). They’ve rapidly become the most dominant team in FVC, and have not yet failed to win any form of competition (2006 Delaware, 2007 Toronto, 2006/2007 Championships).
Personally, I think their 2006 bot was actually more dominant than their 2007, but both were breathtaking. This bot ranks up there with the 2005 FVC27, and 2006 FVC1114 bots as some of the best Vex creations.

oh man, what a beast.

I think they went undefeated their entire season, losing only once in the championship eliminations.

I think they went undefeated their entire season, losing only once in the championship eliminations.

They lost once in the championship qualification rounds; our alliance never lost an elimination round match. As for the rest of their season I don’t know, but I’m sure it’s very likely they never lost any of those.

I’m curious, since I only saw 1114 in Atlanta: Were there any revisions to their robot from when they competed in Toronto?

Aside from this picture, I have a shot of them hanging here.

I’m curious, since I only saw 1114 in Atlanta: Were there any revisions to their robot from when they competed in Toronto?

Aside from this picture, I have a shot of them hanging here.

Doesn’t look like there are any big changes, I’m sure Tyler could tell you.

Thank you all for the kind words. It means a lot to us.

I’ll take this opportunity to tell you a little bit about FVC1114. Comprised mainly of rookie members of 1114, we use the Vex program as a tool to bridge the gap between our strong Lego League program, and our FRC program. We’ve found that it is an amazing tool to bring students and mentors alike, up to speed in terms of robot design, fabrication, and strategy in a minimal amount of time, and overall cost. So far, our program has run with great success training new members, and mentoring other FVC teams.

In regards to the changes between Toronto and Atlanta, there were really only minor upgrades as the robot arrived in Toronto already highly refined. For Atlanta, changes included improved autonomous code, and a rebuilt collector following the release of the Vex Aluminum Metal Kit.

We played around with increasing the size of the collector to hold upwards of 10 balls at a time, but found no real benefit to this. 5-6 balls a load seemed to be the magic number.

To 3053 and 3230, you guys were awesome to play with. It was an honor and a privilege to work with you. Two years in a row, we’ve had fantastic alliances to work with. We couldn’t have hoped for any better.

Good Luck to all, and we’ll see you next year.

They lost once in the championship qualification rounds; our alliance never lost an elimination round match. As for the rest of their season I don’t know, but I’m sure it’s very likely they never lost any of those.

They went undefeated in all their matches in Toronto.