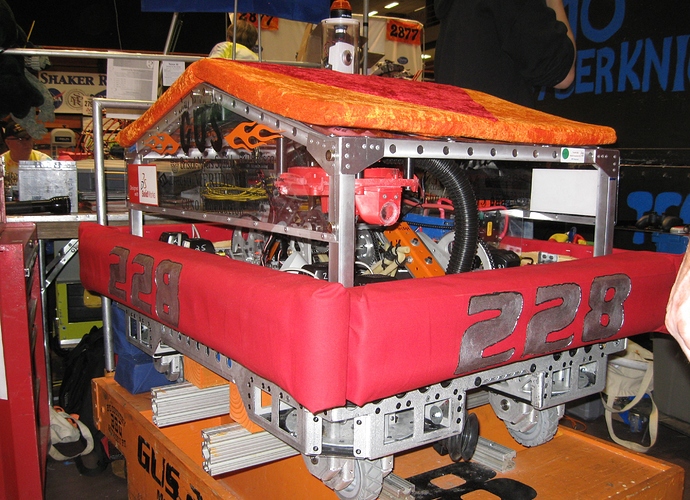 Early on, our practice robot (before WPI) and competition robot (at WPI) were beset with a number of issues with defective COTS items. At the WPI Regional, we only had two qualification matches out of the twelve where no problems were present - the first match and the last match.

After the first match, we began to have issues with our swerve “GUSwerve” drivetrain, a field-centric, independent swerve drive. Originally we thought the Window motors for steering were the only issue, but we soon found that a defective batch of bearings were literally imploding. We had one fail on our practice robot prior to the regional, and two fail only a few matches into the WPI Regional, with the other two pods on the swerve drive only another match or two away from failing. In all three failures, one of the balls exploded and the resulting shrapnel tore the rest of the bearing apart. No bearing = no driving.

Originally we were going to order new bearings and replace them at CT Regional, but we knew we couldn’t just give up like that. So we started disassembling our swerve drive as quickly as possible with the aim to be back in action before our last qualification match on Saturday. At the close of the pits on Friday, our swerve drive was in a hundred different pieces.

On Saturday morning, with our hex cluster shafts were turned into round and keyed for 3/32", the CIM pinions were bored out to 3/8" and broached for 3/32", and new bearings found, we began the race against the clock to reassemble an entire swerve drive train in only an hour and a half. And we were successful.

At this same time, our lead programming mentor noticed that the default position of the jumpers on the Jaguars were set to Brake and not Coast. Upon changing this, we did not have ANY problems with the Denso motors overheating for the rest of the competition.

So after tearing apart our entire drive train, making emergency modifications, and putting everything back together, we had failed to field a full-working robot for 10 of the qualification matches (or even any part of a robot for about a half dozen matches). Thus, we ended up ranked 27th out of 29.

But luckily, the scouters on 230 (who were also neighbors in the pits), knew about our rapid redesign and rebuild of our swerve, and knew it was working, and chose us into an alliance with them and 20. And now with a fully-functioning GUSwerve, our drivers began to use the field-centric controls to their fullest extent to play some excellent defense in the middle and far zones throughout the eliminations. Through hardcore defense, many bump crossings, and several near flips, GUSwerve performed flawlessly.

And while other alliances were struggling with five and six quarter-finals matches, the 230-20-228 alliance went all the way through the eliminations 6-0. It was quite a comeback for GUS, starting Saturday with a drive train in a hundred pieces and ending with a Champion banner.

We’ll be at the CT Regional, and after a double Champion/EI win at WPI will most-likely be in Atlanta (pending fundraising).

Looks comfy. Can I sit on it?

I really love your guys robot this year im glad that you won WPI this weekend and congrats to all the other awards your team won also!

Congratulation on your first championship in 12 years.

It was great playing with you guys. After watching you for for two days with robot parts all over your pit I was glad you got it together to help us and the Rocketeers bring home the banner.

I must say that is an epic story. I think drivetrain failure is one of the most frustrating and demoralizing thing that can happen at a FIRST competition. The drivetrain is just so important to robot functionality. I remember, when I was in high school, how horrible it is to have your robot being unable to compete while you franticly work to fix the robot. I can only imagine how great it must have felt to get that robot repaired and win the competition. Hearing stories like these always makes me think how great FIRST is. Thanks for sharing.

That is just amazing! :eek: Congratulations!

Congrats guys. I knew the team 20 scouting team ranked you highly, and we were amazed when we were able to pick you. During all those ties, your robot looked like the most comfortable thing in the building!

Way to only tell the #1 alliance that you were fully functional :rolleyes: (kidding, of course)

Glad it worked out for you guys in the end. Hopefully in CT we’ll be able to play with you guys in a fully functioning qual match on both our ends, rather than just throwing the match for more points. You guys rocked.

It was great playing with you guys. After watching you for for two days with robot parts all over your pit I was glad you got it together to help us and the Rocketeers bring home the banner.

Thanks to everyone on teams 230 & 20 for having the faith to believe we were back in action. It would have been nice to contribute more offensively, we’ll have autonomous up and running for Hartford, but we can play good old New England defense with the best of them.

The drive team will be back in a scoring mentality, too. It was frustrating when we didn’t immediately find the bearing problem as it was masked by the minor issue with steering. It was forcing the drivers to over drive what was originally a very smooth and responsive drive train. We’ll get the delicate scoring touch back now.

Let this be a lesson to all teams, never give up, and never count yourself out of a competition. Believe in yourself and your robot design, work hard and miracles do happen in FIRST.

Looks very comfy does ur driver take a nap on it befor each match?

and btw Congratulations! on ur win hope to see u at ATLANTA

congrats on the win guyz we all know you deserved it