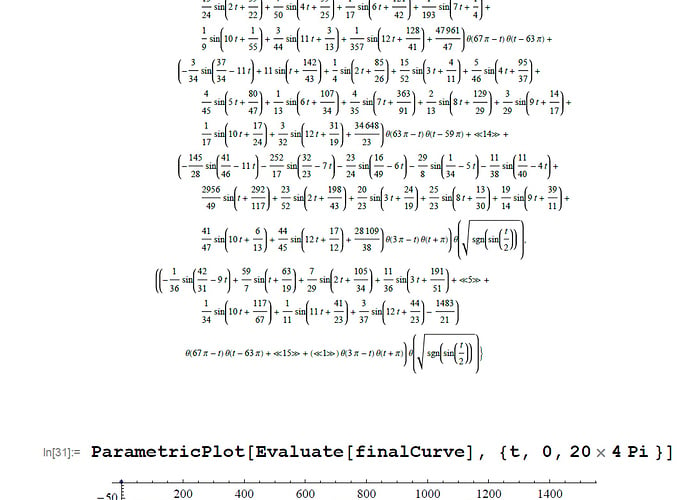 Happy holidays everyone! And here’s some math!

The equation on the top of the image, when graphed creates the “Happy Holidays!” text as shown below, with a method similar to Wolfram Alpha’s shape curves or person curves. I created it last year with Mathematica using the code from here: http://mathematica.stackexchange.com/questions/17704/how-to-create-a-new-person-curve

The details of the math are beyond me (if anyone could explain it, that’d be awesome), but I believe it basically uses Fourier series-based formulas to reduce the curves of text into equations.

I don’t see any real Fourier here, just a parametric breakdown of x (first 9 lines) and y (next three lines) as a function of t (usually time). If it were a result of Fourier analysis, each term would have a linear increment of the multiplier for t.

Though I am reminded of the original “Duck Dodgers in the 24-1/2 Century” cartoon [Daffy Duck cast as Duck Dodgers, Porky Pig as Space Cadet].

And now then, eager young space cadet, here is the course we shall pursue to find Planet X. Starting from where we are, we go 33,600 turbo miles due up. Then west in an astro-arc deviation to here, then following the great circle seven radiolubes south by downeast. By astro-astroble to here, here, and here, then by space navigo-compass to here, here, and then to here and here. By thirteen point strato-cumulus bearing four million light-years, and thus to our destination. Now do you know how to reach Planet X?

[Staring stunned at the cadet, then at the chart’s ridiculously complex path] Well, I wish you’d explain it to me some time, buster!

[Points to progression of lettered planets]

If we follow those planets, we can’t very well miss Planet X.

(laughing) Oh, that’s ridiculous! Of all the stupid suggestions! Ha ha ha! Hey, wait a minute. I think I’ve got it. I’ll just bet that if we follow those planets, we’ll find Planet X. Gad! How do I do it?