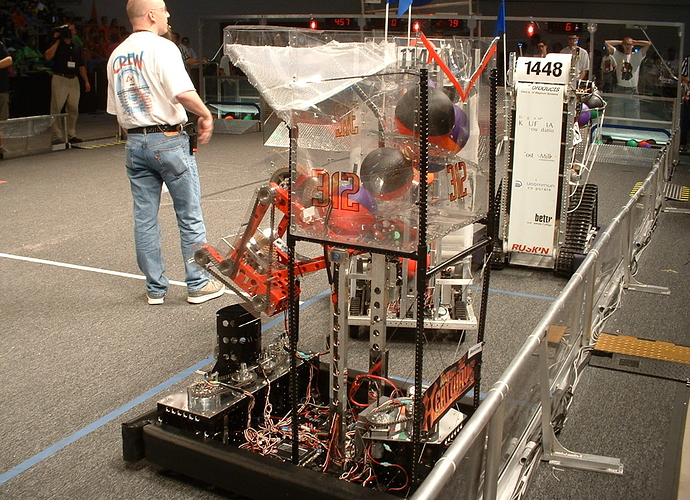 WOAH! That heat wave bot is cool, but that bot all the way back, are those HUGE tank tracks? (1448)

Where on earth did they get those and how much did they cost? More info and pictures needed!!!

Just noticed that they are in the Gal division, so go there and send information to the ones who can’t go.

Where on earth did they get those and how much did they cost? More info and pictures needed!!!

I can’t find any pictures taken by my team of the bot, but it was something. Their pit was one down from ours and had a elaborate tent setup with VERY technical posters and photos… the frame looked so complex (looked very similar to the inside of an airplane) that I heard some wondering about student involvement.

I heard that the treads were made by one of their sponsors, Foster Miller.

EDIT: After some more research into Foster Miller, I learned that they manufacture the TALON Robots, which are in use by military personal.
Photo from a Wired Magazine Story
http://ly.lygo.com/ly/wired/wired/archive/13.11/images/FF_132_bomb4_f.jpg

Notice a similarity in the tread? :yikes:

We were in a match against 312 and nobody told us that they were a force to be reckoned with. I didn’t have a chance to see that robot prior to our match, so when they started driving sideways I was a bit shocked. The swerve drive on that thing worked incredibly well from a bystanders point of view!

From what I could see it has 3 swerve modules each with it’s own 3 speed tranny and angle adjusting motor. Can we get some more information on how well it worked throughout the competition (and perhaps even videos)?