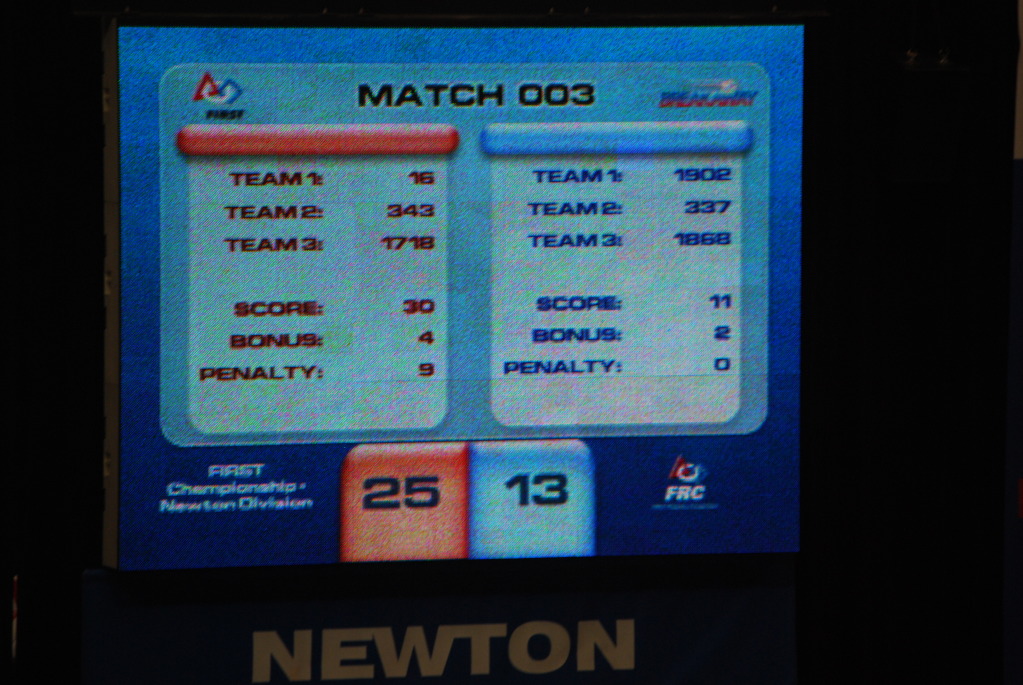 Granted this was an elimination match. It was definately played 3-v-3. The 34 points put up was the highest score this year. The DOGMA penalties were bewildering because the yellow light was flashing, but no balls were in the corrals. May have been a hanging chad. LOL
Aren_Hill January 1, 2019, 3:03am #2

There’s something to be said about an Alliance that can afford to get 9 points in penalties and still put up a 25 point score.

its highest PRE-penalty score, not highest amount of penalties…

In the first match of Archimedes finals, the pre-penalty score was 21-19 for a total of 40, same as the 25-15 on Galileo, but more balanced. There was one 2pt penalty on blue making the final score 21-19. I believe that 19 is the highest losing side score. We also had a loss of 18-20 in M119 of qualifying. Archimedes was tough, but also a great time.

Yes this is the highest PRE-Penalty score. For the highest number of penalties in a match look to week one in New Jersey, where they hit 25+ in multiple matches due to DOGMA.

i can give you a link to a video… but its very low quality, and it only follows our robot around.

I bet that was the field they used at Palmetto!!! Because 3 times that happened to us while were on the red alliance. FIELD ERROR!!!

I can tell you - we were shocked at the penalties. I believe this was the match where Bombsquad did an incredible job in the middle and we and 343 played clean up in our own zone. We were also pretty shocked at the penalties. All 9 were SUPPOSEDLY dogma. I say supposedly because NO one knew where they came from. Not one of our teams, nor human players, nor pit crew members, nor spectators saw a single occasion of a ball being dropped or any other time of mistake. The balls were returning as fast as physically possible, and a steady stream of them was dumping down into the center. It wasn’t worth arguing with the refs - that would have been petty since seeding points don’t matter in elims. However, that’s why in the negative thread I highlighted DOGMA this year as something I could have done without.

The penalties were DOGMA, but as was said; there were no balls in the corrals so it’s tough to get a DOGMA penalty. Someone thought that maybe it was possible that if the balls were too close together, the system didn’t recognize all of the individual balls. I need to watch the video, because I’m not sure we actually scored 34 point (30 plus 4 bonus) - I think the 25 was more indicative of the actual score and there should have been no penalties. Either way it was crazy, 16 just kept feeding us more balls to put in.