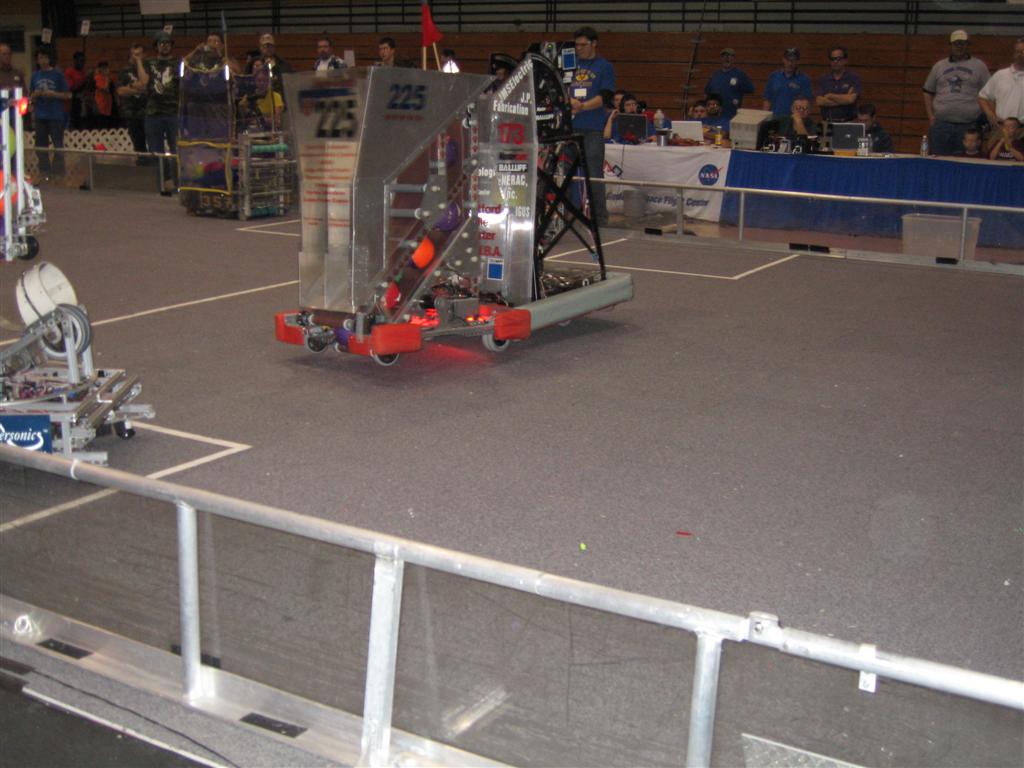 this was just about the coolest collision all day.

perfect timing on the picture. =]

Very cool, imo i dont think its actually as high as it looks. Just the single color of the carpet makes it look higher than real life, but it is defintly off the ground

I never saw 225 in action, but I definately know that 173 was fast enough to pull something like that off.

Very cool, imo i dont think its actually as high as it looks. Just the single color of the carpet makes it look higher than real life, but it is defintly off the ground

i’m pretty sure it was that high. i kid you not.

at least from where i was watching…

Is our right rear wheel on the ground, or is that a shadow? I don’t think we ever did that before.

oh so there were hovercrafts this year

dude, that wicked awesome. so can we expect to see hovering bots next year?

Look at where the people at the scoring table are looking - you’ve got Rich Kressly & sons, Big Mike, Mike Wade, Joe Troy, Greg Needel (cheering) and a bunch of other people who knew there’d be a meeting of the minds mid-field on that start! What we didn’t know is that they could hover there. I was ref’ing just outside the frame to the left, so I had a ring side view for that “meeting”.

The eliminations were some of the best displays of hard-fought and fair defensive play I think I saw all year. My congratulations to all the teams at Ramp Riot for playing so well.

The elimination round at Ramp Riot were some of the most intense, competatives matches I saw this year. Congratulations again to the 173, 357, 222 allinace (those 3 teams could win just about any year) for winning the event.
That collision is just another example of the outstanding play of all the teams during the elimination rounds.

That was cool, but not nearly as good when 173 and 225 knocked each other off course and then 173 and/or 225 pushed the ramp, and the officials were forced to restart the match. 103 (I think) had just made all (I think) their shots into the 3 point goal, and so their alliance was looking really good. Oh well…

That collision was typical for the day. There was some real hard aggressive driving going on and the thing is there were allot of rookie drivers doing the pounding. Scared to think what will happen in 2007. Our frame has a nasty 1" dent in it. The location is right by a heavily reinforced area. It took some serious energy to do it. Next year, build them tough. We don’t do battle bots but, we play hard.

Next year, build them tough. We don’t do battle bots but, we play hard.

Ha ha ha… agreed. To quote our teacher directly, " “Clyde” is officially dead ". Nasty bend in the hopper portion… it went under a lot of wear and tear between broken wheels and (necessary) abuse from our driver last year…