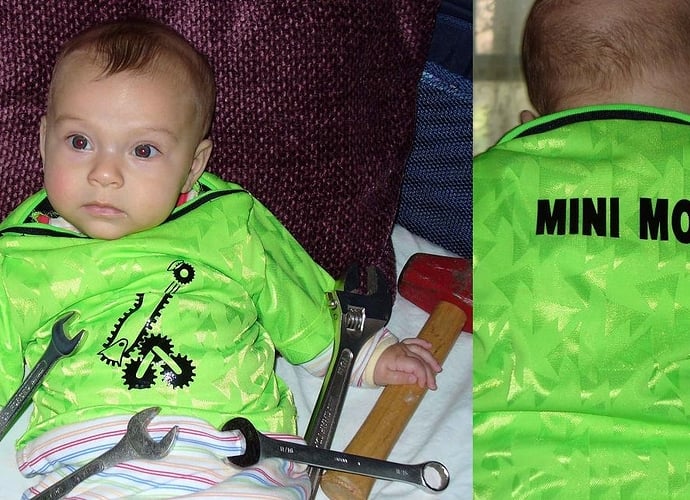 She is actually the daughter of Lou Rosanio, the “Pit Lord” of MOE 365 (also the coordinator of the DE FLL tournament and a WFA winner). Her name is Theresa but has already been dubbed the “Pit Princess”. Don’t know if she will make an appearance at the Duel, with or without her tools.

I think this is the youngest person to ever get an “Awwwwwwww” on CD.

The faculty advisor in 2005 did a similar thing with her child.

rees’s kid has a g.r.r 340 shirt are logo was like the size of the shirt

HOT did that the other year to our driver’s nephew (link)
The shirt looks like it was once full size but someone sewed it up - it that what happened?

SO CUTE !! Welcome to the world of FIRST Pit Princess. <3

Well, Moe certainly starts young. How much longer until she’s a CAD master?

Well, Moe certainly starts young. How much longer until she’s a CAD master?

I hear she’s past that already. She’s currently honing her skills to be able to generate gcode in the mind and send it directly to a CNC without a computer and have the parts appear (Baker beware). Just another example of how MOE green gives their members super powers, that and the fact that she is Lou’s daughter.

Congrats Lou, Theresa is really cute. Too bad she didn’t make an appearance at the Duel.