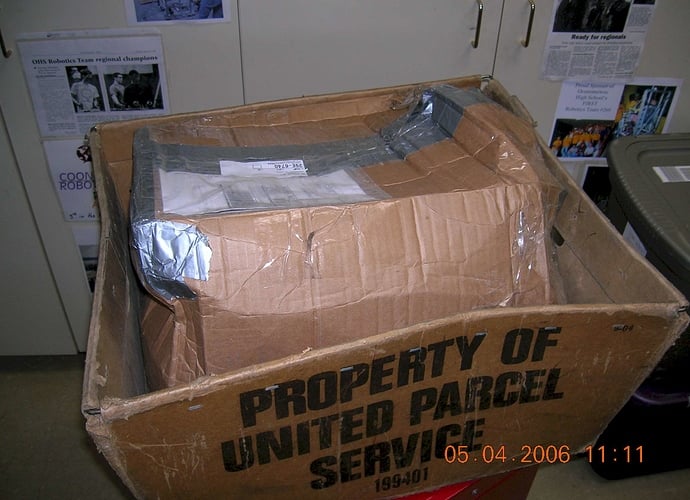 I suppose it is safe to say that team 269 will NEVER ship their batteries home from competition ever again. I don’t have pictures, but the five batteries that were inside of the smashed box all have significant dents in their sides and may have to be replaced for saftey reasons. After seeing this package, I’m afraid to find out what condition the other box (also containing 5 batteries) is in!
Elgin_Clock December 31, 2018, 7:07pm #2

I hate to say this, but it looks like the blame on this one may be in your hands.

That does not look it is anywhere close to being a secure transport for the batteries. I see no batteries inside sign, nor do I personally think it’s wise to transport the batteries this way.

The manual states exactly how to transport batteries to and from competitions, and that’s not just a suggestion, I believe it is federally mandated to use that method.

Someone correct me if I am wrong.

Not only that, but if you put five batteries in one box then every UPS guy who had to pick that box up cursed you profusely! :ahh:

Elgin - we realized this. When we brought the batteries to be shipped, we were told to remove the signage that we had on the exterior of the battery boxes (we have no idea why).

I’m sure they were pretty upset when they picked up that package…5 batteries are pretty darn heavy.

I also see that it wouldn’t matter what was in the box,
If it showed up to my house looking like that… I would
be angry.

Looks like some of the boxes we get once they clear customs :ahh:.

something that a lot of people miss

when you have to ship something solid (like the batteries) its best to cut the box down so its the same size as its contents. If the sides of the box are bigger than the contents fill it with something solid, like panels of cardboard.

That box looks like it could not support another box just like it. They do not ship boxes like this one high on a truck, or on an aircraft. They need to be able to support other boxes.

Its easy to cut boxes down - you cut the four corners lower between the flaps, and then fold and crease new edges, so the flaps fold in further.

The proplem is not just the weight of the batteries, it is that it is not a contiguous mass. They are free to slip past each other.

Full MSDS can be viewed here.

I don’t think that is the right MSDS. That is for a spillable wet battery.

Our batteries are non-spillable: http://www.exide.com/material_safety_data/Battery_Absorbed_Electrolyte.pdf

After looking at that msds sheet. I’d incorage everyone not to tamper with your batteries (which you shouldn’t be doing anyway). Looks like everything in the battery is just plain bad for you, in the o god i’m going to die way.

BTW the second one looks like the correct msds the first one was for a liquid battery not the non-spillable lead acid we use.

If there was any open space inside the box, the batteries did that to the box and each other when they moved around. Judging by that picture, it looks like you didn’t properly package your batteries.

When shipping, the boxes do not stay upright. You should expect them to have a 10 foot drop. Expect these things and pack accordingly. When we shipped computer battery backups at a previous job, we cut down boxes to fit exactly over the retail box, like wrapping a christmas present.

Elgin - we realized this. When we brought the batteries to be shipped, we were told to remove the signage that we had on the exterior of the battery boxes (we have no idea why).

Hmm… odd. I can’t see why. But, ok… well… at least you tried to comply with the manual. lol :o
Yeah, I would be a little peeved about the condition of the box as well then if I was told it was ok to ship it that way, and it ended up looking like that.

Were any of the batteries harmed in any (visible) way???

Were any of the batteries harmed in any (visible) way???

Yes, two of the batteries have cracks in the bottoms and two others have some dents in the sides. Only one of the batteries seems to have survived unscathed. As soon as the other batteries arrive, we will probably test the physically un-damaged ones to see if they are still fit to hold a charge. All others will have to be replaced prior to IRI or at least next year.

I think we’re going to have to chalk this one up in the “Lessons Learned the Hard Way” category!

[edit] We got the other five batteries in - none of the batteries themselves have been damaged (all of the terminal connections need to be repaired), but the box was completely split open on two sides. [/edit]

Next time use a small wooden box or crate. It is more secure and batteries wont come out… ALso wood is a billion times stronger than Cardboard.