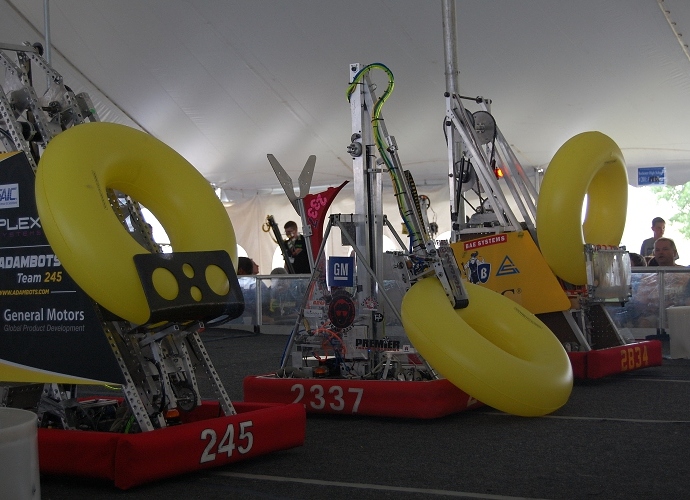 TARDEC was the most fun competition I’ve ever been too. The cool atmosphere (not literally - as people who went there know!) meant I met cool people and watched great matches. Talking to veterans, they revealed that it was a lot like the EPCOT competitions in the parking lot of Disney. Except for the teams not having all their tools, I cannot imagine anything better.

Hey that happened twice this year in michigan, last time 548 was on the other side of it. Unfortunately for 469 this is the second time this has happened to them. Congrats to 2337, 245 and 2834.

Only in Michigan will someone calculate the OPR of an off-season event and post it.

Thank you for the nice picture. We had a lot of fun last weekend. Our 3 robots worked well together and our strategy worked out especially in the third semifinal match.

I want to thank Jim Zondag and a few of the students on Team 33 who fixed the problem with our arm in the last two weeks before IGVC. The issue with our arm crippled us at the Michigan State Championship. Since the State Championship, our shop was completely taken over by the school senior party organizing committee and we had no place to work. Jim graciously offered his team to do all the upgrade for us.

Only in Michigan will someone calculate the OPR of an off-season event and post it.

Thank you very much, sir. It’s greatly beneficial for me to see those numbers, especially as a new driver, to see how we performed against the field quantitatively, in order to gain a better understanding of how and where to improve. Again, many thanks.

All this talk about michigan… I really wish we could still compete there.

All this talk about michigan… I really wish we could still compete there.

We have offseason events… Come to Kettering Kickoff or WMRI.

or MARC. MARC is a good one. Almost all of the good teams from MI go to MARC.

or MARC. MARC is a good one. Almost all of the good teams from MI go to MARC.

There are always a handful of out of state teams that compete there. We were finalists with one of them last year, the Hilltoppers.