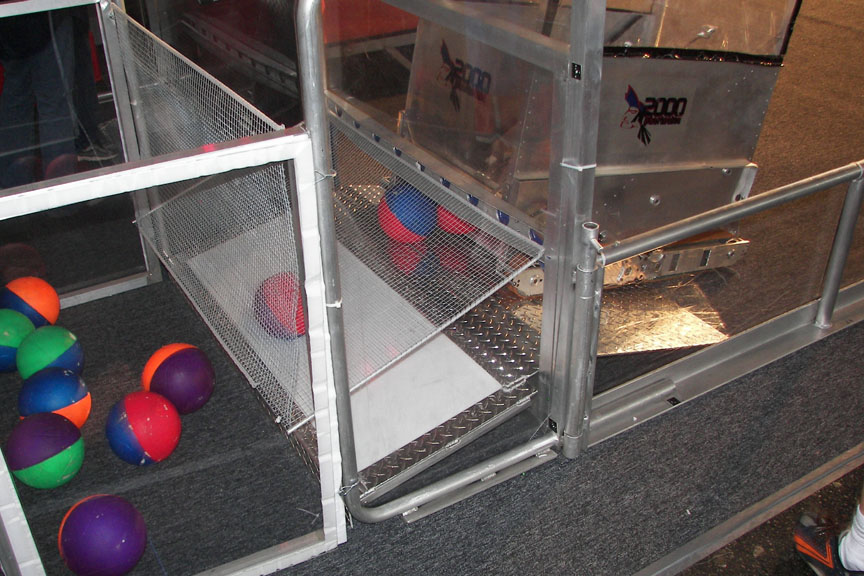 Can someone fill us in on some more details? It looks like a Triplets drive base modified to be a dumper. (Matter of fact, it looks a lot like a shooterless Triplet.)

That robot is the one 1114 built for a rookie team so they could have the opportunity/experiance of a FIRST event. It is very similar to the robot 1305 built in the 2006 season. It pretty much has Andy Mark Transmissions and split tracks with the same picker upper and dumper as 1305.

1305 used this robot to compete at IRI this year and it was called Snow town.

It was really nice of 1114 to allow two different teams to use the robot and it competed very competitively. Thanks goes out to Tyler( the main builder) for building an awesome robot.

The Orchard Park Patriots are a new rookie team starting for the 2007 FRC season. We’ve been helping them get started for the better part of a year. Our Canada’s Wonderland Off-season event allowed them to experience a FIRST event, without all the pressure of a regional. The competed under with the team number 2000, but this was just a number we gave them to show the other teams competing that they were in fact pre-rookies. They will receive a different number once they officially register.

The robot was build by 1114 for two reasons. 1) to test out the SPAM inspired half-track drivetrain and 2) to give Orchard Park a simple and robust robot to compete with at Wonderland.

Following the 2006 FRC season, it was obvious that while our tank tread drive base was effective, it still had the enormous weakness of breaking treads. Between the Triplets, 195, and 48, I think around 45 break-o-flex, err, brecoflex belts were broken. After GLR, the addition of slider beds and flanged idlers greatly improved this weakness, but the slider beds introduced large amount of friction to the system, totally killing our drive base efficiency. We also made the switch to Gates-Mectrol belts through our local supplier Connect Conveyer. We found these to be considerable stronger than the Breco’s.

The principle behind the half-track was simple… reduce the unsupported distance between the pulleys, and add an extra degree of redundancy to the system. By eliminating the need for slider beds, we were also able to get the efficiency back up to an acceptable level.

In this aspect, the half-track was a success. So far, through testing and two FIRST competitions, it hasn’t broken a single belt. We also found that turning performance was significantly decreased by the half-track design over the traditional single belt design. I believe it has to the increased contact further away from the center of mass. Turning was greatly improved by increasing the drop between the center and outside pulleys. Initially, it was 3/16”, but increased to 5/16” after testing. Turning was also improved by switching to a harder urethane rough top belt backing from the original gum rubber rough top backing.

The overall robot design was largely inspired by 1305’s 2006 robot. As one of the best dumper/defense robots last season, it was the logical choice.

Between the Triplets, 195, and 48, I think around 45 break-o-flex, err, brecoflex belts were broken.

Interesting - a new belt source. We shall check it out!

That’s OK, we made up you you. I think 703 broke about 10 belts this year! Definitely looking at a design change for next year!

You can assume whatever you want.

There are some changes planned within NiagaraFIRST for the 2007 season, that will be revealed in due time.

I believe the official count for 195 was about 14 broken belts in 2 competitions. :mad:

I believe the official count for 195 was about 14 broken belts in 2 competitions. :mad:

Cool. Now I know how many spares we’ll have to order if we decide to use belts.

If I recall, the only reason we broke that belt was because we were trying to see if performance would improve with less tension on the treads. There was too much slop, and we were pushed from the side, resulting in a loose tread twisting off the center idler wheel and snapping the belt. We kept them tight for the remainder of the competition without incident, so tension played a major roll. I was relly happy with only breaking 1 belt in 3 regionals + national + IRI.

I really like the half-track idea…something to look at, perhaps even prototype.