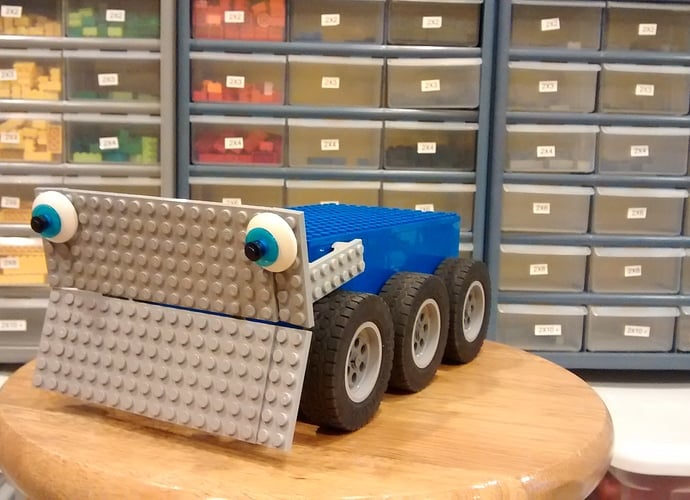 He’s adorable. Can the plow rotate up and down, and do the wheels spin?

Your lego is compartmentalized? Brilliant!

What happens when you drop an Aerial Assist ball on it?

Someone needs to make a T-Shirt for this. I can see it now: In memory of Dozer, RIP.

RIP, friend. I’m sure you will be built robustly in the afterlife.

With those tyres, that guy would be a beast on the FTC field.

Thank you all for the comments. It was a fun build, and I hope to spend more time improving it later on.

He’s adorable. Can the plow rotate up and down, and do the wheels spin?

Yes, the plow rotates up and down and is mounted to some rubber bands (yes, Official LEGO rubber bands) that give it just a little spring so that it bounces up and down slightly a as you move it around. I think it gives it a bit of character.

The wheels do spin. I also designed it so that I can very easily drop the center wheels slightly to give it actual drop-center. It just looks better for pictures to have them all on the same level.

Your lego is compartmentalized? Brilliant!

Common pieces have their own drawers, less common pieces are sorted by color and of course there are a few bins of unsorted… (I really ought to get around to taking care of those) I also have some of the cooler official sets still built, until I scavenge for parts.

What happens when you drop an Aerial Assist ball on it?

I haven’t tried, but I imagine it might look something like that robot in this year’s animation that fell apart.

Yeah, that’s what I was referring to. I work full time (not taking any classes at the moment.) And have been going to robotics each night after work.

Create custom t-shirts, personalized shirts and other customized apparel at Spreadshirt. Print your own shirt with custom text, designs, or photos.

so who wanted the shirt? cause i found one… (note this is not mine)

WE NEED FIRST TO BRING BACK THE OLD ANIMATION! THE GAME INTRO WAS SO BORING THIS YEAR!