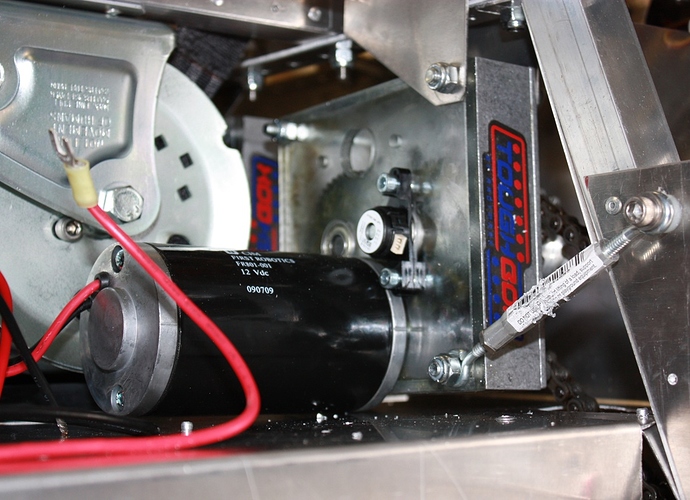 Every year we’ve used a different design to tighten our chains. This is the latest attempt! The motor/gearbox assembly rotates, providing us the ability to loosen/tighten the chains as needed.
JamesCH95 January 1, 2019, 2:27am #2

My team has had good luck for years just dimensioning the spacing properly and not having any adjustment. =shrug=

I like the idea. the only problem that i could see is it bending because it is only attached in two corners. But if that is not a problem then i like it.

That is a sweet looking idea.

In the picture, won’t the motor hit the metal plate below it as you tighten the turnbuckle?

We aren’t worried too much about anything bending - it’s all strong enough to handle the stress that will be placed on it.

As pointed out… The bottom pan does restrict the rotation a bit… That’s one of the challenges of going over the bump! We think we still have enough adjustment for our needs - if we need more, somethig is seriously wrong.

We tried using a turnbuckle for this purpose on our arm motor in 2008, and every time we got any bit of tension on it, the loop side of the turnbuckle bent open. I hope it works for you, but do monitor the stresses on the turnbuckle hooks.

Now, I’m an electrical guy, but I’d be worried about the torque that the upper nut and screw will experience, which comes from the fact that the chain is pulling on that gearbox a few inches away from the gearbox’s center. Seems to me you’re going to bend that bolt right quick. It won’t come out easily when it does.

daltore - The gear box has been fully tensioned for over a week now, and we haven’t seen any deformation of parts. How was yours used - in tension or in compression? It’s hard to explain, but the turnbuckle here pushes out against the two bolts, so most of the force is directed along its axis, instead of on the loops. If we ran it the other way (from a different corner, for example) where it was pulling on the gear box to create tension, i would expect we might see the loops open up.

Don - It’s hard to see in the picture, but that upper corner is supported on both sides by some pretty thick aluminum, and those plates are part of a bracket that attaches to the frame very securely. We aren’t worried at all about the bolt sheering, and if it does happen to bend a little… we have saws and drills that can get it out if we have to use the box in another robot

We tried using a turnbuckle for this purpose on our arm motor in 2008, and every time we got any bit of tension on it, the loop side of the turnbuckle bent open. I hope it works for you, but do monitor the stresses on the turnbuckle hooks.

I would recommend using left and right threaded rod ends. They’re able to sustain more misalignment and loading than the generic hardware store turnbuckles. One can order all of the parts from McMaster without much fuss.