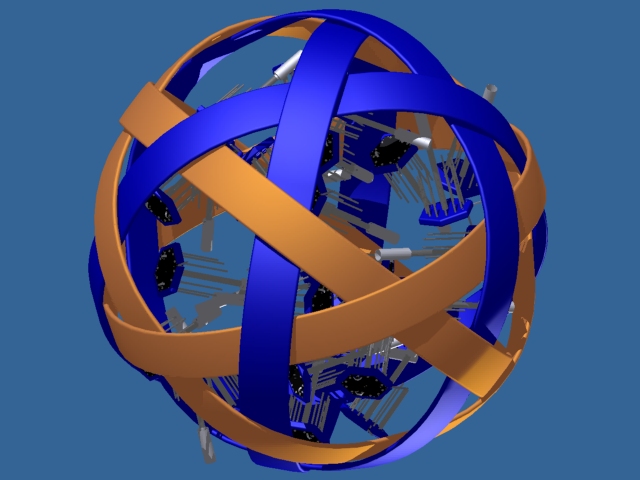 Does that one sticking out still count?

The season of boredom is definitely here.

God save all of us that have no off season.

Can you describe the steps used to model the ball?

God save all of us that have no off season.

Btw, how’d you do this? Just change the size of existing models or what?

That thing is beautiful.

Can you describe the steps used to model the ball?

I can’t take credit for the ball. I tried for an hour or two, then put up a contest in my Google Talk status to see if anybody else could. Half an hour later, my friend David (who is very skilled at Inventor) sent me back a pic of the incorrectly-woven ball from the manual and animation. It was, however, completely accurate to the manual. I asked him if he could do a correct one, and ten minutes later, it was done (Did I mention he was skilled at Inventor?)

I think the general concept is to have two types of bands, orange and blue. The orange bands have 1/3 of a pie in the center, such that when three are joined to form one whole pie, the bands form a triangle on the ball. This was repeated with the blue bands, and the two pies were joined at the center of the ball. This pic should explain it better:

(BTW this is the same model that was used on our button design, if you happen to have any 449 buttons)

Btw, how’d you do this? Just change the size of existing models or what?

The trailer is original size, existing model. The model was made as described above. It was enlarged to be 25 feet in diameter.

And I thought the track balls were big

Somebody build that thing!

How much polycarbonate and spandex would it take?

Somebody build that thing!

How much polycarbonate and spandex would it take?

Six polycarb strips 32 inches x 78.5 feet, not counting the overlap needed for the rivets. Slightly less than twice the spandex, so about 78.5 feet by 60 inches?

The plastic would be about two inches thick, keeping things to scale (assuming 1/16 original thickness)

Wow I am glad to see that I am not the only person that does not have an off season.

The sad part is now I am done.

By the way, nice inventor work.

By the way, nice inventor work.

The GDC is well aware of our eagerness to hear game hints.