pic: it's a Vex Holonomic Drive! 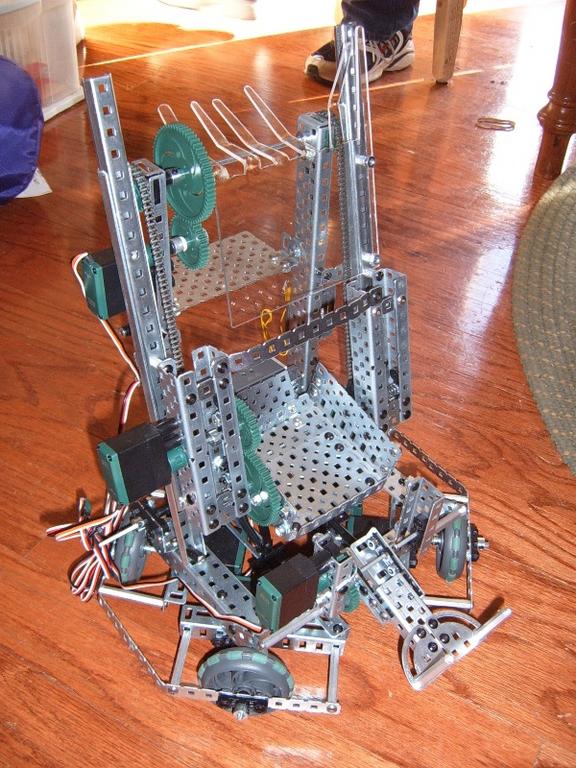 I really really love to try new ideas, especially with Vex. So here’s my second Vex Robot - “Holly”-nomic Drive. Holly was built for WPI’s Savage Soccer competition (Linkage: http://users.wpi.edu/~savage/), and it was designed to pick up two pool balls and up to four penny rolls to dump them into the pendulum. Unfortunately, between SAT tests, a team fundraising drive, and a local “Christmas in the Village” celebration, we were unable to have enough people there to actually compete.

But I still finished the robot to a beta stage.

Here’s how it works: The left joystick controls the orthogonal and diagonal movements, while the horizontal axis of the right joystick controls the rotation, giving full holonomic drive out of this. (Which works very well too.) The robot drives very well on hardwood flooring and linoleum and pretty good on carpet and the soft tiles of the 2006 FVC field. Despite being a holonomic drive, Holly also drives really well on sloped surfaces as well, including the ramps of the 2006 FVC field.

Besides the full holonomic behavior, I also had to deal with a lack of enough controls on a single transmitter to drive every function on the robot. So I developed a “drive mode” and “manipulator mode”. In “drive mode”, the joysticks control the holonomic behavior of the robot, with the right rear push buttons controlling the front ball flipper. But by pushing either of the rear left buttons, the joysticks would cease to control the drive motors and would enter “manipulator mode”. This would control the elevator and the tray rotation, as well as the flipper. When the rear left button was released, the controller would return to “drive mode” again. That way, I was able to incorporate the functionality of two transmitters into one. As usual with all my Vex robots, this was entirely programmed in EasyC 2.0.

BTW, my Triple Play bot has NOT cannibalized or taken apart!

(It took a $229 dollar order from VexLabs and about $120 dollars worth of additional parts from RadioShack to avoid having to take apart the Triple Play robot.) The Triple Play robot is still in one piece enjoying retirement from its 1,200 mile tour. The only thing that it is missing is the controller and the radio receiver, which are on Holly.

Very cool, although I must imagine that 4 omni wheels makes it pretty easy to push around.

Billfred, don’t give me ideas!!!

Very cool stuff here. How many motors total are there on that thing??

I just bought a kit and the first thing I did was a 3 motor version of a holonomic drive (two center drive wheels, one motor controlling two perpendicular wheels). Not as good as the real thing, but something to get the kids thinking before the season starts.

Am I correct in saying it is NOT super easy to push around because the wheels are not all pointing in the same direction? BTW, have any videos of it driving?

Coincidentally, I’m on the verge of finishing my own omniwheel robot. I got the chassis together yesterday but haven’t actually powered it yet (electronics aren’t ready). I was pushing it around and noticed that the traction wasn’t great, but it was decent. I think that the problem is it’s too light. It probably weighs <2lb. The motors won’t backdrive, but it will slide.

I’m using these wheels, by the way.

I got to see the Holonimic Drive in action yesterday and it was amazing. Very sleek movement and it seemed like the drivers handled it fairly easy. We wont even go into the beauty of the rest of the robot. Unfortunately they were not able to compete in the competition.

I do recommend that you check out the Savage Soccer site…we had alot of fun yesterday at WPI and the game was absolutely amazing. I think FIRST could learn a few things from these guys!

Am I correct in saying it is NOT super easy to push around because the wheels are not all pointing in the same direction? BTW, have any videos of it driving?

It is somewhat easy to push around, as one of the Vex Squarebots from our team was able to push it pretty easily across the linoneum floor. It has a lot more traction on carpeted floor, and it becomes harder to push. Also, the weight really helps get it more traction. When it was only the basic chassis, the wheels would slip on smooth flooring, and it would not get good traction. But this was solved once I built all the manipulators onto the chassis.

EDIT: The robot uses seven motors - four for the drive, and three for the manipulators.

I should a video of it driving around some time soon, as I have been non-stop busy for like the past month. But, if anyone was every wondering how a holonomic drive robot would perform in snow, today’s your lucky day! http://www.simtropolis.com/idealbb/images/smilies/6.gif

I took these pictures this morning when a few snow showers brought us another 1 1/2 of snow. It works okay on the sidewalk, but it was sliding all over the place. I was able to tape a little kiddie snow shovel on the front, and I was able to try to shovel some snow. This makes me want to build one of these out of Vex parts next, so I can shovel my driveway from the park bench on my front porch. http://www.simtropolis.com/idealbb/images/smilies/10.gif

That just looks like a very bad idea. Especially the wires dangling on the ground. Great fun though, until the magic smoke is released.

Oh, the magic smoke will just make make it seem a bit more like Christmas.

This makes me want to build one of these out of Vex parts next, so I can shovel my driveway from the park bench on my front porch. http://www.simtropolis.com/idealbb/images/smilies/10.gif

Why not just retrofit a powered snowblower to drive autonomously?

Why not just retrofit a powered snowblower to drive autonomously?

it might just be me, but i would be scared of an autonomous snowblower. just brings thoughts of it getting messed up and making one of the smaller neighborhood children into “ground beef”.

ground meat. unless you somehow hit a cow it wont be beef would it?

but how about a remote controlled one? maybe not autonomous…

I should a video of it driving around some time soon, as I have been non-stop busy for like the past month.

Finally! I had a few free hours free after school today (what a novel idea ;)), so I decided to assemble the video of my Vex Holonomic Drive robot. All of the video was shot this past weekend at the Savage Soccer Demonstration at the WPI Robotnautica FLL Tournament. Many thanks to WPI for hosting the Savage Soccer competition, which presented a perfect excuse for me to build a holonomic drive.

Art, better get working on another white paper for this one. :rolleyes:

You have done it again…The talk from the Vex guys during Rosie team meetings has always drifted to talking about what “Art from Gus” has done this week with his Vex kit. I can hardly wait to see the Vex snowcat. Will it be full size?? :ahh:

Seeing this thing play Savage Soccer this past Saturday was a real treat. The looks on the FLL kids’ faces when this thing started driving were priceless!

do you have the code for that robot?

i would like to make something like this. i was wondering if i could see your code for it.

What did you use to bend and cut the metal and stuff? On the poster that comes with the kit it describes a machine that bends and cuts metal.

oh dang that is sexy