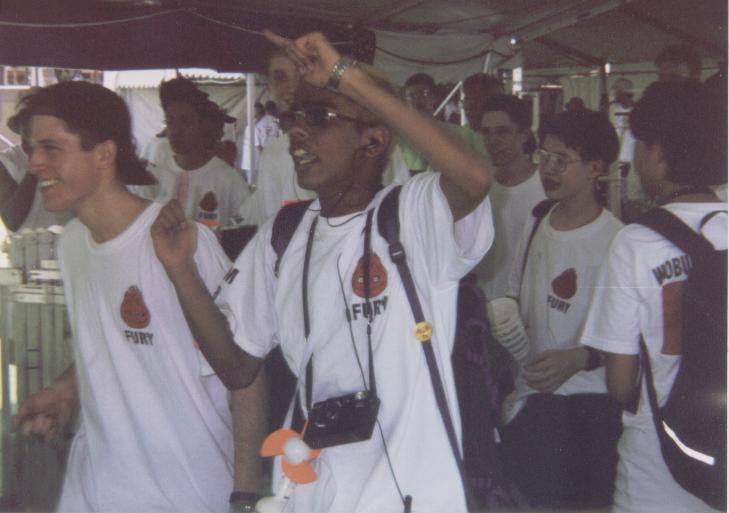 It was recently revealed to me that “My Canadian Friend” that I met at Disney back in 1999 was none other than Karthik. I had talked to this kid for a while at the event, but never found out his name. I had taken a picture of him, but never thought anything of it. Now that I’ve figured out who it was, behold the Karthik of yesteryear…orange hair and all =)
Andy_Baker December 31, 2018, 5:48pm #2

What is he doing, some odd bird impression?

Not much meat on them bones.

How does every picture that winds up on these forums seem to catch him mid movement, typically when he’s yelling something… hehe…

I think maybe he was singing - he’s got earphones on. But then I see that everyone around him is smiling, so that simply cannot be the case…

The best part of this picture…

Going on the basis that everyone around Karthik is smiling, I’m going to have to guess that his dancing really is better than his singing.

If I’m not mistaken, the even better part of this picture is a certain someone with an account on chiefdelphi with a similiarly titled user name as to myself =). Any takers? Remember, this is from quite a while ago!

I knew the orange hair photos would surface eventually. In my defense I was trying to go blonde, but the peroxide didn’t take to my dark hair. Trust me, it was fashionable at the time…

IIRC that picture was taken after Team 188 had just played a match with Beatty. We teamed up to score 496 points, one floppy away from a perfect score of 540. Also in the picture is my long time teammate, Ian Mackenzie. At the time I was in my 1st year of University and Ian was in grade 11. Weird, it seems like it was yesterday.

Actually, now I remember! I know exactly what I was doing in the photo. In 1999, the then WWF was having one of their resurgences. Led by the Rock and Steve Austin, wrestling was actually popular. I’m pretty sure I’m doing the “New Age Outlaws” introduction](http://en.wikipedia.org/wiki/New_Age_Outlaws#Introduction), except it’s modified for Woburn Robotics and Team 188. My version went like this:

Ladies and gentlemen, boys and girls, children of all ages. Woburn Robotics, proudly brings to you, the FIRST Champions of Canada! The Robot’s name is Fury! The school’s name is Woburn! --Team! One! Eighty! Eight!

SlimBo, those were definitely the good old days.