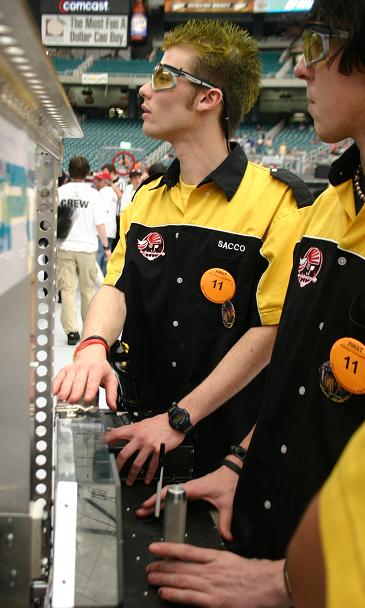 Our control box this year had two hand-turned aluminum sticks mounted on the stock bases, with some electrical detail that i’d rather not get into. Before one of our matches, the control box was left on the ground as the human player loaded the robot with balls. He accidentally tripped over the control box and snapped the plastic mount off in the aluminum stick. We couldn’t mount the custon stick, nor could we mount a stock stick. Luckily, someone had a pen, and we used that as a temporary fix. Our driver actually liked the light weight alternative, and we wound up switching out both sticks for pens. I have a feeling that the post season may be an interesting driving experience…
Ben_Piecuch May 4, 2006, 1:21pm #2

Throughout all of our controller redesigns, we’ve also found that a lighter handle equals a better feel for the driver. The return spring on the KOP joysticks is quite small, and the extra weight of the taller, bulkier handle creates a very floppy feeling.

By making the handle lighter, and shortening it’s overall lenght, the “tightness” of the joystick can by adjusted to your liking. Two years ago, we machined short, solid handles from HDPE, and were pretty happy with the results. This year, we switched to hollow PVC handles with HPDE endplugs. These were a bit lighter, and therefore, gave an even better feel for our drivers.

I believe our national champs decided to use screwdrivers as their joystick handles. Doesn’t get much easier than that!
Team 296 Operator Interface

hey we actually won that match…

We had something similar happen in Waterloo, we had our button for shooting just pop off, and no one could find it. I just asked for a pen and spent next couple of rounds shooting by pushing down on the pen. It worked, but not really well, and took a lot of force, but what can you do?

When we were playing with T.R.I.B.E. (237) at the UTC Regional, they dropped their controls about a foot from the ground and one of their CH Flightsticks snapped right off its base. :ahh:

I’ll have to track down a picture of our joysticks… last practice match at the Vegas regional, the control panel was leaning on the cart, and fell over, snapping both joysticks. After that match, we stuck a couple bolts into the joystick holes, hot glued them in… worked better then they started.

just out of curiosity, how do you change the sticks on the KOP joysticks? and what happens to all the buttons? (I don’t want to try something without knowing :p)

just out of curiosity, how do you change the sticks on the KOP joysticks? and what happens to all the buttons? (I don’t want to try something without knowing :p)

It’s pretty simple, remove a couple of screws and the handle comes off. You could chop off the button wires and screw on a new one handle, or, if you need the buttons pick up a couple of momentary switches from RadioShack and just wire them in, depending on your handle it might take some drilling. Evern if you don’t want to attempt making a new handle, taking apart a joystick to see how it works isn’t a bad idea. (Its all screwed together, and doesn’t need much finger yoga)

Sweet, thanks! I’ll try it.

When we were playing with T.R.I.B.E. (237) at the UTC Regional, they dropped their controls about a foot from the ground and one of their CH Flightsticks snapped right off its base. :ahh:

I don’t think I ever heard that story. LOL Or… maybe I did. idk.

Anyways, so sad… too bad it wasn’t one of the horrible white joysticks that broke instead.