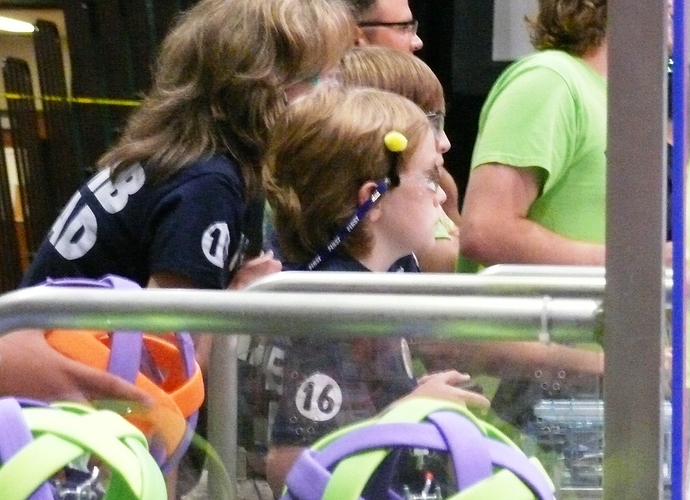 John Taylor gets his FRC driving debut at the 2009 IRI. The greatest thing about it was the look we got from Dan Green when he saw us behind the driver station. I think he was looking around for the full-sized drive team…
Nick_Lawrence August 3, 2009, 9:46pm #2

They drove pretty well, I must say. How much practice did they have?

JTN’s going to be a beast pretty soon…

They drove pretty well, I must say. How much practice did they have?

A lot. JT was not planning on being out there, but he practiced as the gunner all summer with the new driver candidate. Our new driver, Austin, is 15 and going into the 10th grade so he is officially on the team. He was one of the World Champion FTC drivers this year in Atlanta.

I put JT in because I knew the Chickens and Frogs could carry the alliance if need be and they were very gracious to let the 12-year-old on the field!

It is not encouraging when your alliance partner looks like an FLL team :ahh:

After alliance selection he was talking to me about past 469 robots… That kid knows his stuff! I was really impressed… With him, and Katie in the wings, I see a strong future…

My prediction: The Bomb Squad with a driver having 5+ years competition experience will be totally unstoppable. OK, that’s not an earth-shattering prediction…

As I listen to him argue with his dad about the necessity of prototyping his VEX bot (he already knows everything about physics and robots…) - I am once again reminded of how the smartest, most talented students REALLY need solid (and hard-headed) adult mentors.

Someone give that kid a high-five for me, I wish I could have done that at his age.

And I see nothing wrong with an alliance partner that looks like an FLL team!

I still recall the expressions on faces of St. Louis regional volunteers several seasons ago, when a slightly shorter version of John Taylor Novak explained the differences between holonomic and swerve drive systems to the robot inspectors.

Meredith, you and John will be needed – as rails to guide his launch trajectory. JT will accelerate like a NASA rocket sled.

Happy birthday by the way!

Happy birthday by the way!

Happy birthday JTN! You looked pretty good out there at IRI.

Happy birthday JTN! You looked pretty good out there at IRI.

Are you “Looking Forward” to next season??

I wonder if it’s possible for Chief Delphi to institute a COPPA program? Kids can be allowed to join message boards before 13 if a waiver is signed / notarized by their parents and sent to the administrator of said forum under US law. It’d be cool if there was a system for that on CD for the next JTN.