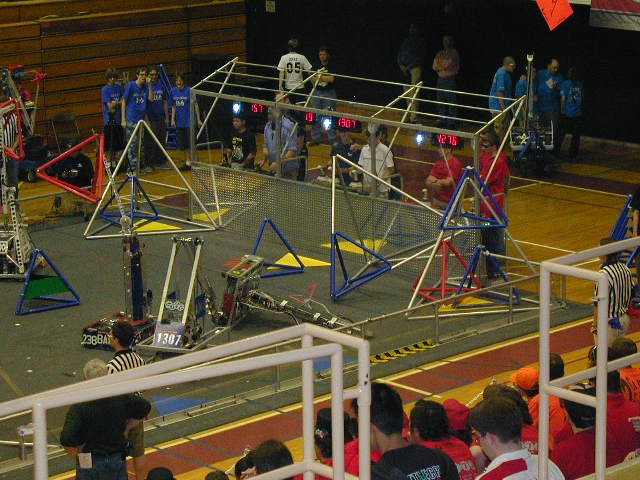 Here we are tipped of our own accord with several other teams on the field.

Although I was not on that side of the field, I have an idea as to how it might have been scored. SOme of you may recall the center goal being tipped over at Mayhem, this is similar. When a goal is tipped, the opposing alliance owns that goal. So, if a red robot tipped that goal over, it would belong to blue.

I do not know about the tetras that would have been in. Rules allow removal of contained tetras, so the one on the ground probably wouldnt count. The one in the goal might, but it isnt stacked. Look closely, you will see that the one in the corner of the tipped goal is sitting in the apex of the goal. You can tell because 1) if it was stacked, the metal pipes would be inside the blue tetra, and 2) the apex resting against the neighboring goal was probably because the goal was probably dislodged first, and then tipped, with the pipe that is currently flat on the ground on the axis, and 3) for that side to be the top, the face of the goal that is close to the alliance station would have velcro on it, which by looking at the reflection in the diamond plate, it does not.

Any other refs have an opinion? This was only my second time reffing so I could be wrong.

Here’s another camera angle of the same incident.
I was sitting in the first few rows of stands near the center of the field.
I did not see what happened during the match at all. I was looking at the other side of the field when I heard their robot hit the ground. I looked over and this is what I saw.
1276, did the fall bend your arm at all? It looks very slightly bent in the picture I took. 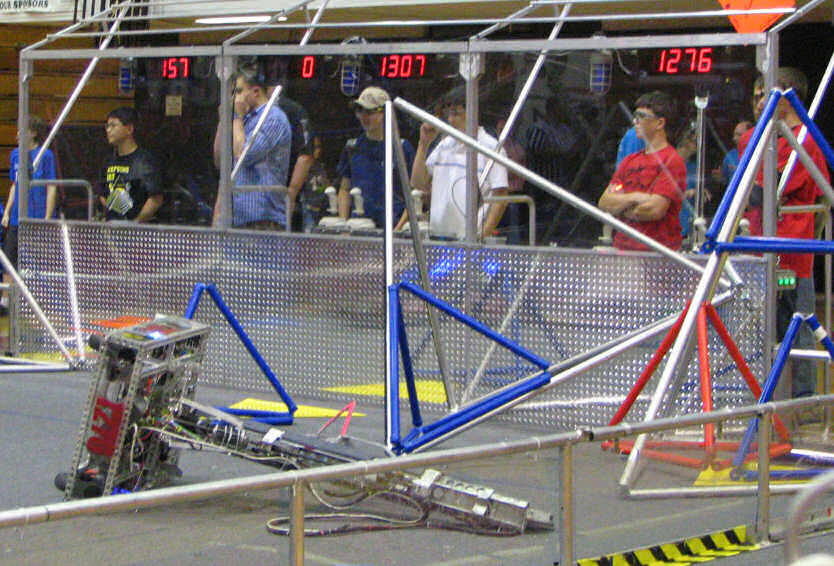 I can’t believe I didn’t see that! :ahh: I must have been in the pit at the time!

It was not bent but that fall snapped our arm pulley causing us to lose the use of our extension for two matches before it was fixed.