pic: Lexan: Bulletproof, but not robotproof 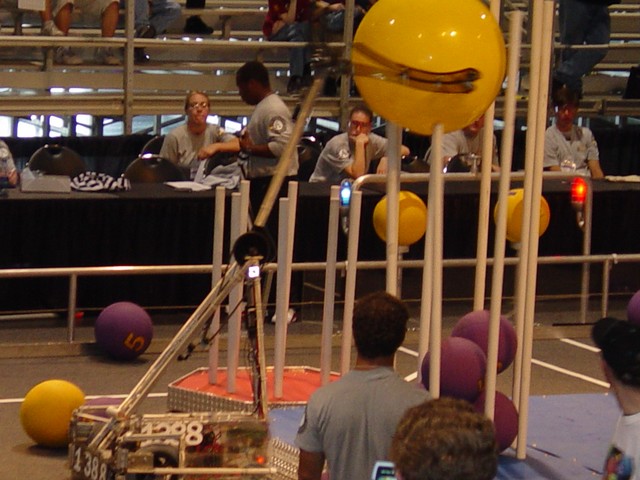 Proof that you can indeed break Lexan.

Where is the broken lexan?

And is that a 10 point ball on the field??? I was at VCU and watched a lot of the PacNW webcast and did not see a single 10-pointer end up in play. The teams that even got to those balls just knocked them out of play. Is this what is happening at the other competitions?

yeah, where is the broken lexan?

anyways, it looks like a practice round by the lack of alot of people in the backround. the 10 point ball might have just been put back in the field after being knocked out. i saw that happen alot on thursday.

at utc, a 10 point ball was only knocked into the field once during qualifying and elimination rounds and we happened to be playing in it. our partner got it to our human player but it didnt get into the goal. it was cool to see one on the field though.

has anyone else seen a 10 point ball in an actual round?

I believe the lexan being referred to is the top section of the ball grabber, which is sticking at an angle upwards.

Yea … it was the upper piece of the claw. If you look closely at the picture, you can see the piece of Lexan bent WAY up.

What happened, was when we drilled the holes for the spacers, the lexan cracked a little (little being less than 1cm long). It worked flawlessly for over a month, then it decided to kick the bucket at the competition. Lovely. Thanks again to Team 599, who provided us with a piece of lexan large enough to make another claw piece.

Heres a better picture of the damage:

Two years ago, I snapped a piece of lexan when our robot, which had just gotten the equivalent of an engine overhaul, smashed into a goal in a practice round. We had a big piece of lexan covering the robot, the corner smashed into the goal, two pieces of lexan shattered off, in total weighing about .2 lbs. When weighing in later that day, we were exactly 130 lbs :-).