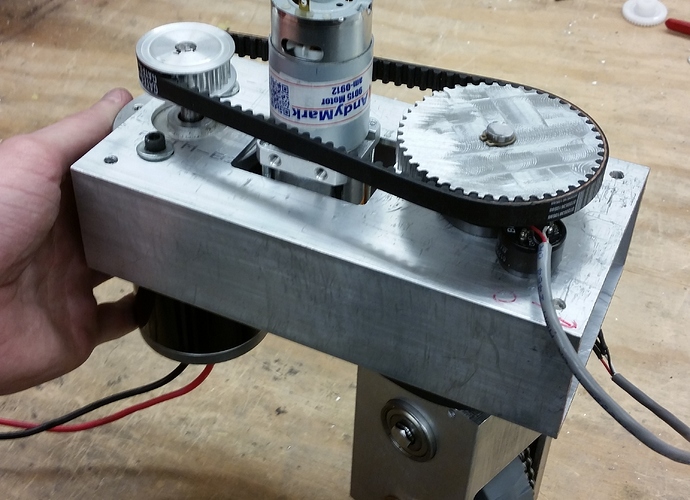 My team (2471 team mean machine) did two swerve drive iterations last year. They were lightened on a CNC mill so they ended up being pretty light weight. They were also very reliable. The only issue they had was the wearing down of their mild steel miter gears, which were replaced at champs.
This year, we wanted a design that would be machinable on a manual mill, because using the CNC mill was very difficult last year (it’s away from our build site). We also wanted the new design to be smaller, more reliable, and hopefully lighter. I think this design meets all those criteria, weighing in at 7.3 lbs (although it needs a cim encoder).

The other nice thing about this iteration, is the upper portion is fast to build. The caster portion was built earlier in the year, and I don’t know how long it took (I didn’t CAD it, or work on it), but I do know that I CADed the upper portion last monday. Because of the holidays, we didn’t start working on the physical version until Sunday afternoon.

Nice. With so many advanced (and amazing) swerve systems out there its nice to see fundamentals being produced.

Now if we just had a mill at our school…

Will you release a CAD model?

You were able to do this on a manual mill? That’s pretty impressive!

Do you have any other pictures/ renders?

Will you release a CAD model?

I didn’t CAD the caster portion and I don’t know where it is, but when I get my hands on it, I’ll try to post the designs.

Looks good! For the bearing holes was it drilled, then reamed or just drilled?

That looks like a neat layout, with the drive belt actually going around the steering motor; it allows for a lower COG than most swerves I’ve seen. If a low COG (and profile) is a real driver, though, is there enough room for the steering motor below the “gearbox”? With steering motors below the box, I could see this as a great low-profile, low-COG, easily machinable swerve - and probably as one which could be downgraded to crab drive by orienting the boxes radially and running belts or chains annularly.

Is there a chain in the caster section? There doesn’t seem to be enough room for a belt (much less a bevel gear) on the wheel axle.

Hey, this is really neat! I like how this feels very “compact”, and doesn’t look terribly difficult to machine. You certainly did a good job playing to your team’s resources.

I do have one nitpick with this design though.

Right now, from what I can tell, it looks like you have the CIM pinion position determined by your screw locations, which for this application isn’t ideal. Screws/rivets do a poor job of “locating” parts in an assembly, and ideally they shouldn’t be used to do so. The screw’s hole is over sized by design, and this clearance will introduce slop into your CIM shaft’s position.

In FRC, this stuff usually doesn’t matter a huge amount, except in the case of drive components which require precise distances. Depending on how big the CIM screw holes are sized on the module, your CIM’s location and consequently your actual C-C belt distance could be off by more than you’d like.

I would mill a .75" hole for the shaft to go through, and use the .75" OD nub that’s on the face of the CIM to properly locate the motor on the part. It’d be a waste to precisely mill all your holes, and still have inaccuracies in the system which could affect how your belt drive behaves.

EDIT: I realized that there’s some slotted screw holes for tensioning that I missed; However, I’d still recommend making that hole .75", but extending it as a slot along with the screw holes.

That leads me to another question. How do you go about determining proper tension in your belts? I’ve struggled with this question for a while, as it seems difficult to do without using expensive instruments. Any tips?

+1 on using the cim boss 0.750" diameter to locate the cim, if you haven’t already.
Very neat. I like the belts and the encoder placement.

OK, I’m just going to spitball what seem to be the best ways to make this really hand machinable on a drill press (which is the best tool my team has)…

If I were doing this, I would probably make the gearbox much flatter so it just held the steering belt/chain/gears, or move the drive belt/chain down so that both were inside the gearbox.

Attaching a plate on the “top” of the caster box would be the biggest challenge, requiring welding or a rather good bar-bending brake.