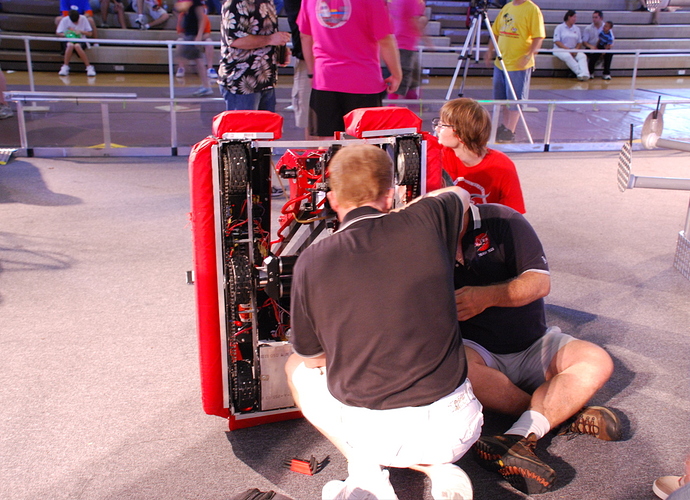 Through it all, teams were tremendously patient and helpful, loaning MARS equipment, even when a team needed it back in the next round so they could play! Event staff went out of their way making it possible for MARS to remain a player, including allowing us to use an old, working radio (which created extra work for them each time we had a match). Praise to all.

Despite numerous difficulties, MARS was selected by Team 179, Children of the Swamp, to join their alliance with Team 744, Shark Attack. We made it into the finals, where we met the powerhouse alliance of Teams 233, 180 and 108. **This winning alliance used one of their time-outs in the Final’s match to allow competitor MARS time to replace it’s stripped gear plate; these three teams are models of “gracious professionals”. **Thanks also to Team 168 for “waiting in the wings”; they were ready to fill in had our repair failed. Congratulations to the “Pink Spam SigmaCats” on their win.

As always, Mission Mayhem was an event MARS will not forget.

**This winning alliance used one of their time-outs in the Final’s match to allow competitor MARS time to replace it’s stripped gear plate; these three teams are models of “gracious professionals”. **

Ahhh…the power of FIRST!
This story definitely makes me glad that I can be a part of such an inspiring group of individuals!
Keep up the G.P.!

MARS you guys did amazing! Great job to that whole allience. I give you guys respect for keeping and running and knowing the show must go on. Don’t worry your not the only robot that has some issues at Mayhem. 1251 didn’t exactely run so great and spent alot of time in that upright position as shown in that picture. Congrats on the finalist once again guys.

Can We have an official Delphi form dedicated for Gracious professionalism moments?