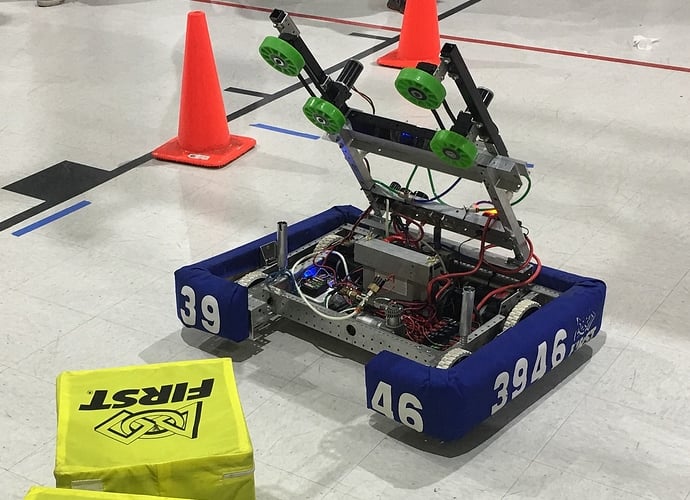 Our 2018 off season robot at a STEM day at St. Tammany Middle School, a few weeks prior to competition. Way smaller and better than our competition robot - took 3rd seed and captained 3rd place alliance at Beach Bot Battle, first time we’ve ever selected alliance partners. Video from the BBB sponsor in which we feature prominently
Making parts by hand. How do you do it?
Battery holding devices
KOP Drive base configurations?
Robot Dimensions
Clippard Air Tank Ports
Mixed-size wheels?
Rookie Team - How much should we worry about weight shaving?
POLL: Meeting during off season?
Your Team Sucks At Defense: Here's Why
Rookie team looking for a build project to train team
What is your greatest “jerry rigging” story ever
Examples of Robot Rebuilds
Setthew2000 January 1, 2019, 6:30pm #2

How have you guys got your intake set up? I love the design! I am looking to update our robots intake in the off season. Thank you!

How much does it weigh? Do you have the heft and power to be a formidable defensive pushing bot (ala 2655), or are you light and geared for speed so that you can attack the opposing switch, defend your own switch and work the vault?

Well executed switch bots with good strategy have been able to do very well at many competitions this year. Getting the autoquest ranking point consistently is key (I assume you have a consistent switch auto?).

How have you guys got your intake set up? I love the design! I am looking to update our robots intake in the off season. Thank you!

The arms are made of 1x1 polycarb versaframe. As shown in the pic, they were actuated by opposing angled 3/4" diameter, 2" throw cylinders. At that demo, we found out we didn’t really need the actuation, so for Beach Bot we hard mounted them to that cross bar partway up the arm; all our “give” is now in the polycarb arms and the wheel compliance. This change removed the constant maintenance and occasional breakage on the slides, which were made of the kit parts from igus. IIRC, there is now 16.5" between the insides of the arms, (17.5" on centers).

We use four VF planetary side mounts and four VF output stages (1/2" hex) to support the four axles which mount the intake wheels. They are belted together with 100t 9mm belts and 18t pulleys all from Vex. The rear two are driven with BAGS reduced 10:1. My math shows proper C-C distance is 8.07", but we get by with 8.00". The wheels are obviously the AM 4" green compliant wheels (1/2" hex).

Caveat: we can control, herd, and push a “sideways” cube into the exchange, but we cannot pick one up to launch into the switch. When this is needed, we use one of our “twist out” command buttons which spins both BAGs the the same direction; this ejects the cube with little forward speed but enough spin to turn it about 90 degrees, setting up a “wide” pickup.

The arm is set up so the leading wheels are completely outside the bumpers down, inside the FP when up (45 degrees angle by design, but actually a bit higher by the time we got everything working right).

The arm is actuated with a 2.5" diameter 2" stroke compact cylinder from Bimba (FOS-502) we used to stretch our launcher springs in STRONGHOLD. The clevis bracket is a piece of 1-1/4" square x 1/8" channel with an angled slot cut in it (higher at the rear, lower at the front to increase the lift) made using our perfboard and drill press technology. OK, we were a bit short on the lift force, so we added a 3/4" cylinder at the front (mounted only to the chassis) to give the arm a starting boost, which lets the rear one do most of the work.

The chassis is 2/3 of the AM14U3. The side plates are from our 2017 practice chassis, front, rear, and middle from our 2018 practice chassis. We cut off the back 11" of the inside and outside sheets chassis and only use 4 each 6 inch wheels. We might have gone a bit shorter, but this length lets us use the churro holes at 11.767/20.233" to stabilize the outer sheet.

How much does it weigh?

Our Beach Bot weigh in was 65#; even with bumpers and battery, it’s occasionally lifted by one person to place on our “operating stand” or wagon, and I don’t mean one of the football players either. I’ve carried it (arm down, bumpers but no battery) under one arm a hundred feet with no real stress.

[quote=wgorgen;1779032]Do you have the heft and power to be a formidable defensive pushing bot (ala 2655), or are you light and geared for speed so that you can attack the opposing switch, defend your own switch and work the vault?

Definitely the latter – stock AM14U2 gearbox (8.45:1) with U3 (6") wheels, for a design speed of 12.7 ft/s, but it gets up to it rather quickly as it’s so light. Our idea of defense is as commonly stealing a cube from the opposing portal before the other alliance can get to it as it is blocking for more than 2 seconds. Our robot-to-robot defense is usually a check block on a scale bot en route to wherever we’re going; usually costs the opposing robot 3x as much time as us.

[quote=wgorgen;1779032]Well executed switch bots with good strategy have been able to do very well at many competitions this year. Getting the autoquest ranking point consistently is key (I assume you have a consistent switch auto?).
At Beach Bot, we had two “drive straight to the switch, and launch the cube if we’re on the correct side” autos, one for left and one for right, and a “drive straight” for when we had a partner who could do both from the center. We didn’t go any farther at that time because encoders weren’t working. For Red Stick, we’ve been working on a “start center, drive to the appropriate side of the switch, and launch”; it’s working about 50% as of today in practice, and improving each session.

We did not know there were any other Koopas out there. Ours was so named because the robot resembled a turtle. What’s the story behind your robot’s name?

We did not know there were any other Koopas out there. Ours was so named because the robot resembled a turtle. What’s the story behind your robot’s name?

Our original definitely did not resemble a turtle - the name applies much better to mini.

I wasn’t there, but I understand that during lunch break at one of the Saturday scouting sessions (watching streaming weeks 0 - 3 in a classroom on the main campus), the discussion turned to the Mario games and they decided that would be a good robot name. Our graphics sponsor is the father of one of the students who was there, so it made it onto the robot. Other than cubert, varieties of cheese were all that ever showed up on the robot-name-2018 channel.

At 2018 Red Stick Rumble, we were first pick of the #6 alliance, and pulled at least our fair share of the load to a second place finish. We were the top vault bot, scoring 255 vault points in 6 qual matches, and 220 in our first five elims matches, and I believe 265 in the 6 elims matches. We also ranked #10 in park/climb points with NO climber.