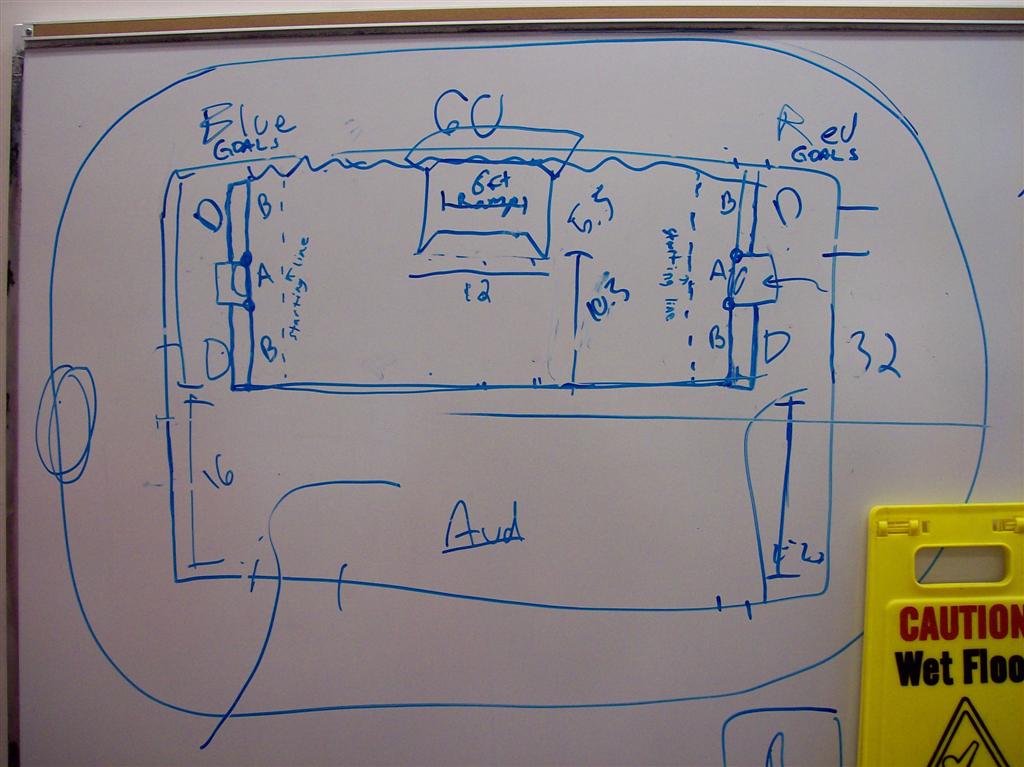 Check comments below for more photos of the Mission Mayhem field.

One thing in this picture that I don’t think was emphasized enough in the my thank-you posts: WildStang’s awesomeness in providing support for our webcast. (At one point, we joked that the slide on the big screen should be changed to “Webcast courtesy of WildStang…no wonder they won Chairman’s!” ;))

You can also barely make out the zip ties on the posts of the corner goal, near the top. That’s how we held the new goalposts into place; they expanded further once they reached the top of the player station wall. Very trick.

Oh, and a word on how we got the drop lights to work. Turns out that the plugs on the drop lights accept a standard computer power cable. So all of the drop lights and all of the OI AC adapters we used (remember, no Hatch field controllers in sight on this field) were plugged into a surge strip at the scoring table. Before a match, the lights would be on, and robots were enabled. (This made the three-foot line especially important; it’s also why 233’s ball collector was running during introductions.) At the end of the match, the scorekeeper would flip the switch on that surge strip, and the lights would go out and the robots would be disabled (no data, after all). I’m sure there’s better ways to go about it, but I trusted it enough to be on the carpet for a lot of the day.

Wow, that was all going on? I, myself, was there and had no idea that everything was manual. Well… you can have my testimonal – everything was going SO smoothly that I didn’t even notice or suspect things were done this way.

Haha, as another random input for how we got to doing it that way… the night before (after the massive redesign when the finishing group was working on stuff)

Me @ Midnight (we had to be back at 7am): “Kevin, are you gonna be able to get all of these competition cables made… I guess we’ll have to not have E-Stop, but I need you to dissect these joystick cables and solder the connectors into a Disable/Enable box. I don’t think we have a voltmeter… can you do it?”
Kevin: “Uh, why don’t we just have them stand behind the line until the start… and we’ll connect everything to a powerstrip and shut it off at the end.”

K.I.S.S principle wins again, and gave us both another hour or two of sleep. Lol.

wow, thats an amasing solution, I was wondering how you would try to get the field working knowing that it can be a challenge sometimes with the first equipment. I was amased that it was running like it was. That is one of the best solutions I’ve heard to keep the field running ever lol.

I got a PM asking for more details about the field, particularly size. Here’s what I wrote back:

I don’t think that anybody ever got an official length of the field. I want to say that we used the full 54’ length, since the room was 60’ with very little room left at the ends. Mike Walker’s drawings said the field was 16’ wide; the FIRST field drawings seem to back that number up.

The goalposts were 30" square from 3/4" PVC, with legs to attach them to the posts that joined the corner goal and player stations. We used cheap garden netting to divert balls into the ball corral; folks with clickers will have to keep a closer watch than with the standard field.

The ramp was a standard FRC ramp, but 5.5’ wide instead of 11’, placed at midfield against the back wall.