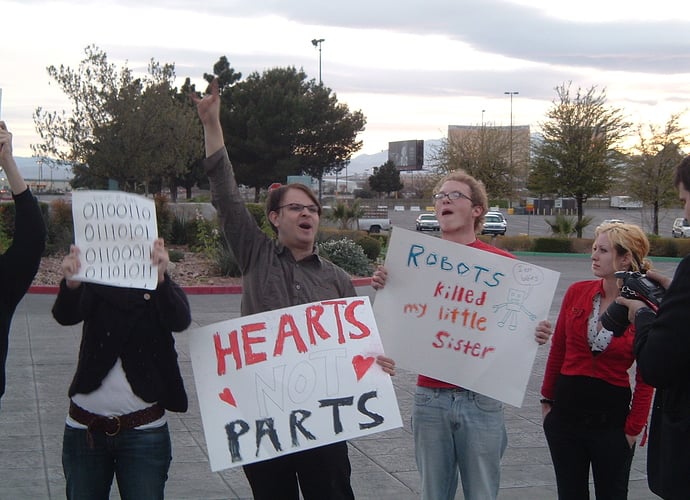 Another view of the protestors outside of the Thomas & Mack Arena at the Las Vegas Regional.
5yearbarna December 31, 2018, 7:12pm #2

Not such a nice word in binary, I seem to remember the police showing up. No one could figure out if these protesters were serious or not. I love college students with nothing to do.

[edit]I just noticed the other thread, sorry for starting a new one.

Uh… isn’t the language written on the leftmost sign a little crude for this forum environment? (And yes, I just translated that binary to ASCII, just to see what it said.

But hey, I’m sure there are some people on this forum that are even nerdier than I am, and can do it without the aide of an online converter.)

I had a bit of prior knowledge as to what the sign said, having been there and taken a few photos myself. I didn’t realize there was a sign in binary until I was looking through the photos later. One of the protesters had a jacket on that said they were “Not an evil robot.” I asked them how they could prove that they weren’t themselves robots. Never did get a response to that one.

they dont look like hippies thats for sure. I wish I could have been there to see this. When did this take place?

they dont look like hippies thats for sure. I wish I could have been there to see this. When did this take place?

did anybody ask how robots killed their little sister (because more than one person held that sign)?

did anybody ask how robots killed their little sister (because more than one person held that sign)?

probabally one of these type robots: (when they grab you with those metal hooks you cant break free)

A few thoughts here - one could contact that school and find out what that demonstration was about. If you would like, pm me and I’ll give you some leads as to how to go about it. That would provide enough information as to if it was a mock demo or real.

Secondly, the campus police came while the demonstration was in process, which tells me the group did not have this cleared with the school in advance -

Thirdly, in the other picture one of the people is wearing a wedding band, and as seen here the young woman is dressed for a business day, and as someone in this thread stated they are sharing the ‘my sister’ poster. Also that poster is small and simple. During protests on campus, graphic details are given out with issues involving harm and loss of life. I would venture a guess that these are graduate students doing a project for a class or organization. The binary is for shock to see just who gets it and it is also just plain rude.

Just in my office here at UT, we have hosted 2 different RTF groups who needed access to a law office environ. (One was a horror movie with fake blood and everything) The lead producer had to come present their project, obtain permission from me and from our director, make arrangements for time, set up, clean up, etc. It was a two week process.

If this group is doing this for a project, the polite thing would have been for one of them to approach a mentor on the way to the bus and let you know what was going on. It appears they were going for ‘shock’ value and for filming their own involvement. You can see their photographer, perhaps for their student newspaper. It’s fun to diss and talk about but try not to get upset about it. That’s an .02
Jane

Find it in this thread Here