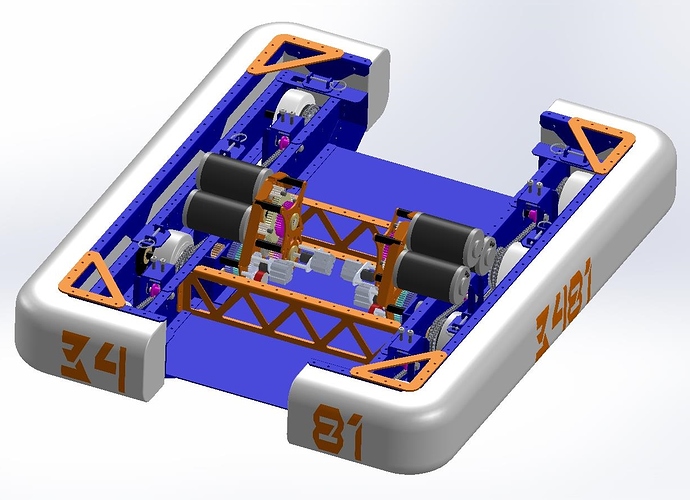 This is my first full sheet metal drive train. It features two 3 CIM four speed gearboxes, #25 chain driven 8 wheel drive with 4" x 1.5" Colson wheels, an 1/8th inch drop on the middle wheels, and spring loaded chain tensioners for each loop of chain. The frame is 24" x 31.875" and it weighs around 35-40lbs (just a guess). The bumpers are attached via 4 quick release pins on each half. Due to the fact that both the front and rear planes on the belly pan are cut out, there is a lack of support for the pontoons even with the two lateral supports in the middle; however, we’re planning on having structures for mechanisms in the front and rear that will stabilize the frame. Also, as soon as I know where everything else on the robot is going (the drive train is the only thing done so far), I’m going to add some sort of lightening pattern in the belly pan, being careful not to take too much strength out of it.
1 Like
Joe_G July 22, 2015, 5:57pm #2

As you mentioned, the double-cutout is going to result in a lot of twisting between your two drive pods.

A couple of things you can (and should) do to mitigate this, without any extra systems. First, there’s no reason for your cross members to be so close together. You’ll get much more rigidity if you move them to the extremes of the bellypan.

Second, your cross members are only supported on a single flange. They will have a tendency to bend about this flange. You can add a whole lot of strength by modifying the cross member’s flange so that it rivets to the top flange of the drive rail.

The empty spaces on the belly pan are going to be occupies by other mechanisms, but as soon as they get put in, I’ll move the supports as far out as I can without interfering with whatever’s there. Also thanks for the suggestion to rivet to the top flange of the drive rail

If you want a more accurate mass than just a guess, which at some point you probably will, you can get that data from CAD. When I model things, I just set the materials for the different parts I’m making, and it spits out the mass for the part. For things like CIM motors, cylinders, and bearings, where there are hollows inside that I usually don’t draw in, you can use the masses listed in the specs and override the mass property in the part drawing. Then, you should be able to update the mass property in the main assembly and get a fairly accurate estimate.

35-40lbs sounds a tad low, especially with bumpers. and a lack of lightening holes in the sheet metal. 40-45 without bumpers would be my guess.
As Paul said, you can get accurate weight estimates by adding materials to parts and using the listed weights online for COTS parts. This is a major feature of CAD that can be used to excellent effect.

As Joe said, you will experience strength issues with those center members. Your superstructure should be designed to support your chassis if you’re planning on keeping those cutouts.

I forgot to clarify; my guess for the drivetrain was without the bumpers. I got ~30 when I checked the mass properties, but the parts all had default material so I added a little bit to that. I’ll do a more accurate weight measurement later after I’m done assigning weight and materials to parts.

A lot of really wild speculation took place about another three-CIM-per-side four-speed drive train recently on this thread. Four-speed seems less than fully useful for FRC, though I believe we did come up with a few edge cases that might call for it. PTO (Power-take-off) options seem more likely uses of second shifters on the drive train.

A lot of really wild speculation took place about another three-CIM-per-side four-speed drive train recently on this thread. Four-speed seems less than fully useful for FRC, though I believe we did come up with a few edge cases that might call for it. PTO (Power-take-off) options seem more likely uses of second shifters on the drive train.

Both threads were started by the same person.

Assuming you add some superstructure connecting the two sides, I don’t believe twisting would be a problem. As Chris said in the other thread, those gearbox plates look slightly too lightened, but if you put a few long standoffs between the gearboxes to cross-brace them, it might help.
Just make sure you understand why you made each design decision you did, and it looks great.