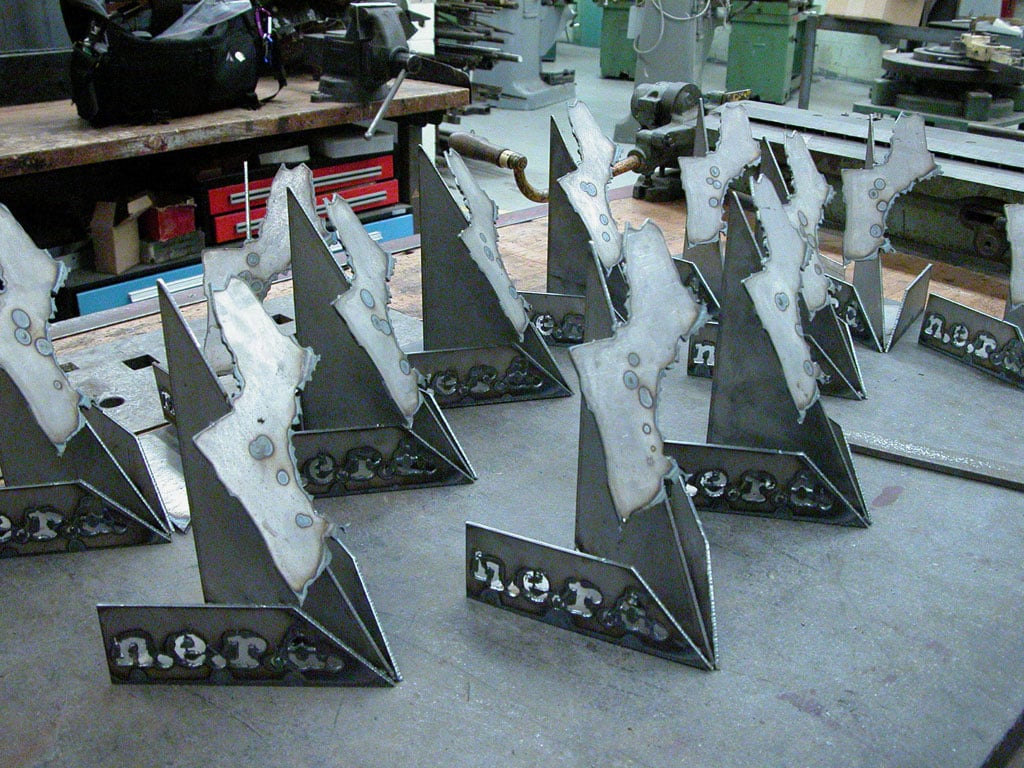 That is really COOL!!!

I recognize the shop in the background

How many of those were made with the plasma cutter?

What is this for?

Ouch! Sharp! They look like they’d make rather wicked weapons. If Batman were a n.e.r.d., he’d be in heaven with a couple of those nerd-a-rangs in his utility belt.

What is this for?

These were trophies to be given to teams from all over (not just New England) for their performance based at a New England Regional or Off Season Event.

Teams were chosen by a nomination process by N.E.R.D. members, and then voted upon.

There were 10-12 awards I believe in various categories and some were handed out to winning teams who attended Battle Cry 7 @ WPI this weekend.

Others have yet to be handed out, because they were teams who were not at Battle Cry 7 but who attended and showed a strong dominance in multiple areas at a New England Regional or Off Season in the 2006 year.

Congratulations to every team who won a N.E.R.D. award!

Pics of wining teams and their trophy’s handed out at Battle Cry 7 to be uploaded soon when I figure out how and where they should go since they are all on my camera. LOL

Even though they look rather sharp none of our students cut themselves on them.

BTW Andy I didn’t catch up with you but wanted to see if you used a CNC Plasma cutter or a transfer jig.

BTW Andy I didn’t catch up with you but wanted to see if you used a CNC Plasma cutter or a transfer jig.

I can answer that one, Scott Shaw and myself created these trophies using a Plasma Cam CNC plasma cutter. This machine is really good for cutting 1/8th inch steel sheets for classes at Watertown High School. Sadly, we only use this machine to prototype designs for robotics.