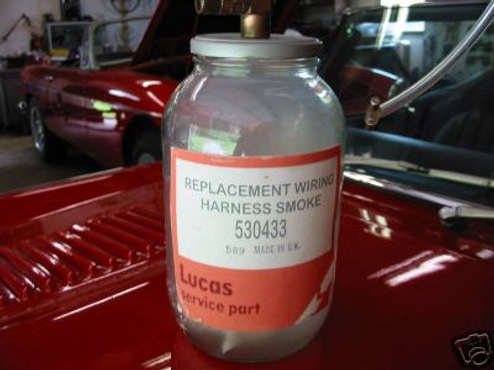 You can replace it!!!

Did you actually buy some?

…got the empty jar.

here is where we make the replacement smoke,
http://www.shsfirst.org/gallery/main.php?g2_view=core.DownloadItem&g2_itemId=568&g2_serialNumber=2

I am not sure why it is making you follow the link, but it is worth the sidetrip IMHO

Ah, the one thing that Lucascould make reliably!

anybody want some??? For some reason my wiring jobs are like non stop factories of magic smoke! JK
But really, i’ve got some extra. Just call 1-800-argon-neon-flarben-ooblik

Hi dennis long time no see, i remember that joke even though it was true. Hope your having fun down there

Ah, the one thing that Lucascould make reliably!

Brings back “good” memories of the old MGB I drove as my first car. 1975 convertible. I was looking at that website, and I had a lot of the features they described. The dimming and intermittent headlights were a problem and left me without headlights one night on a dark country road. Wiggling the switch fixed it and I later hooked it up right and ran the high current through relays right near the headlights and the switch was just used as a signal to the relays. It was originally carrying 20+ AMPS through the little black switch in a convertible that was dryer with the top down than up. Hmm… what else… the backup light didn’t work, switch was bad in the transmission. I found that the wire going to the Lucas fuel pump was melted! A little scary… Oh man… British wiring scares me. My whole car was rewired by me because of the many problems. Also, the wiring harness under the steering was dry rotting, which was scary, but all I could do is just tape it up and not touch it.