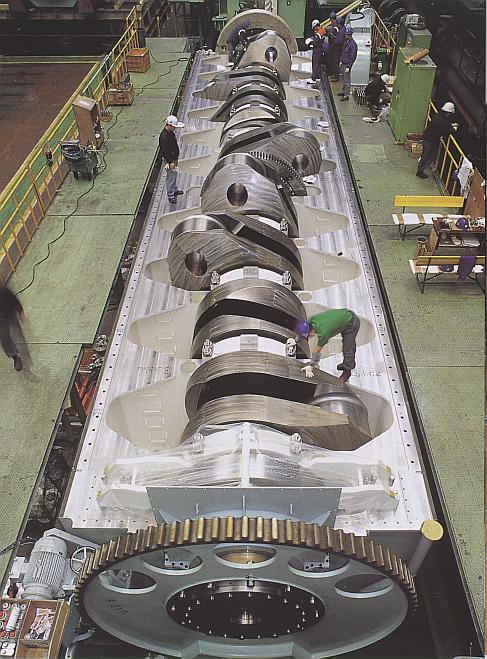 Since CD is just about dead these days and the only new pics were of people I thought I’d post this. Someone sent me a few pics of this 90,000 hp engine. Imagine the possibilities.
BBFIRSTCHICK December 31, 2018, 1:48pm #2

Is that an engine for a ship or boat of some kind?

I wonder how many RPM’s it can turn???
What do you use as a starter…maybe some 6 liter V8??

Each spark or glow plug must be the size of a person.:ahh:

Just did a little search and found this .

The Wartsila NSD (Sulzer) RTA96-C two-stroke diesel engine is the most powerful and most efficient piston prime-mover in the world today. Bore - just under 3’2" (965mm). Stroke - just over 8’2" (2489mm). Available in 6 through 12 cylinder versions (all inline). Engine weight exceeds 2000 tons in the 12 cylinder version (the crankshaft alone exceeds 300 tons). Point of maximum continuous power is 89,640 HP (66,844kW) at 100RPM with the 12 cylinder version. Point of maximum fuel economy is 53,244 HP(37,704kW)at 90 RPM. The 12-cylinder engine exceeded 100,000 horsepower during overspeed testing (all of 101.5 RPM!) while under test at Japan’s Diesel Union works (who built the first engines and from who these pictures are taken). Fuel consumption at maximum power is 0.278 lbs/HP/hour (BSFC). Fuel consumption at maximum economy is 0.260 lbs/HP/hour. At maximum economy the Sulzer engine exceeds 50% thermal efficiency: i.e. more than 50% of the fuel going into the engine is converted to power. For comparison, consider that automotive and small aircraft spark-ignition engines have British Standard Fuel Consumption figures in the 0.40-0.60 lbs/HP/hour range and 25-30% thermal efficiency. Even at its most efficient power setting, the Sulzer 12 cylinder consumes nearly 1,660 gallons of heavy fuel oil an hour.

Have a nice day

wow that is unbelievable. I just cant say anymore then that. excuse me why i go wipe of the drool

can i get one of those for my geo? ill put a turbo and an intake on it, make it all fast, maybe add some nos…

a guy at school showed me that a couple of months ago. pretty sweet :]

urge to find and steal…rising…riSING…RISING…hehe. That is seriously amazing. Jonathanb…the gear closest to the viewer appears to have 5 speed holes…about 3 feet in diameter a piece! Now if we could only fit that into Matt’s Jeep…

Oh and Greg…don’t forget…it’s gotta have a carbon fiber wing…ooo and hood pins!

This reminds me of the stuff that they have at the Beatty Machine headquarters that they store for the big steal companies…giant transmissions and gears and stuff. Or the mill that is like 20 feet high and the lathe that you could chuck a person in…
But the machine parts they store are massive like this stuff.

now that we know what it can handle and just about the rest of the specs of it. what it gods creation can actually use that other then a powerplant, some sort of turbo propped cruise ship or something larger.

Im very curious as to what uses that type of engine.

Those engines are used in ships. Really really big ones, container ships.

I guess it’s true, ‘There is no replacement for displacement’.

*Originally posted by oneangrydwarf *
**This reminds me of the stuff that they have at the Beatty Machine headquarters that they store for the big steal companies…giant transmissions and gears and stuff. Or the mill that is like 20 feet high and the lathe that you could chuck a person in…
But the machine parts they store are massive like this stuff. **

heh ever seen a lathe you could chuck a volkswagen in? pretty neat. Our machine shop has one of those. I have yet to see it used for anything.