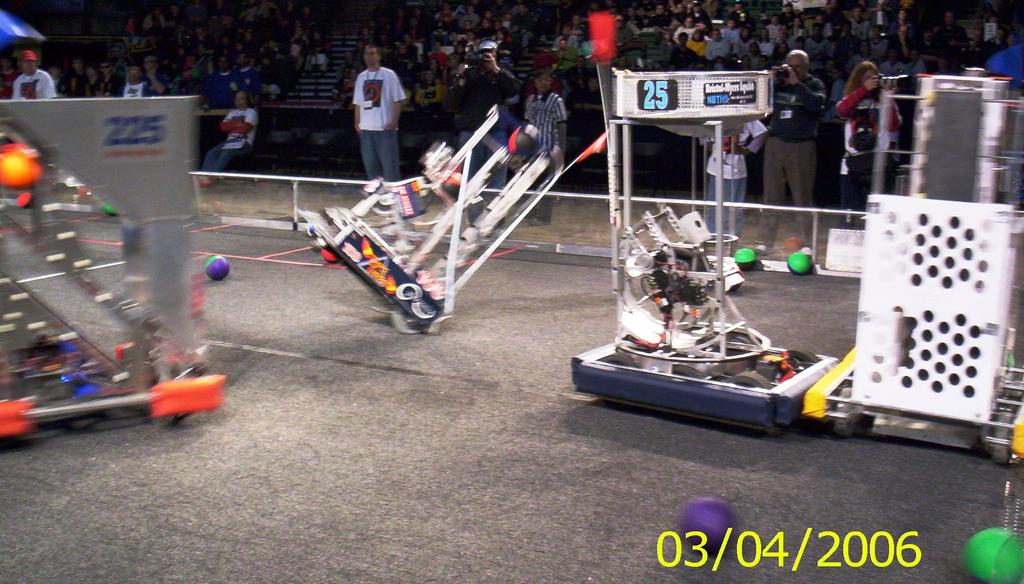 I would have to say that a lot of bots have been tipping over that i have seen watching at VCU I dont know about the other regionals!!!

Almost everyone tipped over. It didn’t happen as much in the semis or finals but in normal rounds entire alliances would be knocked over.

What is causing robots to tip over? Riding up on balls? Really hight CG? Changing direction quickly? Other robots pushing them?

Agreed.
Also, for us it was once trying to get up the ramp before we realized that the extra 1/4 inch of diamond plate was hitting our bumpers - then we took off our bumpers. We only fell one other time, and I don’t think we actually fell - if the robot that had pushed us and fallen beneath us had been moved, we would have slid off the ramp and into an upright position (I think).

What is causing robots to tip over? Riding up on balls? Really hight CG? Changing direction quickly? Other robots pushing them?

haha…thats a very…interesting picture of our bot…we only actually fell over twice i believe…once at phili and once at trenton…thanks to our handy dandy kevlar armor and titanium braced 80-20…we were able to withstand most 10000 foot falls and machine gun fire.

Gee, and I thought that tipover was caused by the recoil of the shooter! Leave it to Ken to find the most rational explanation for anything.