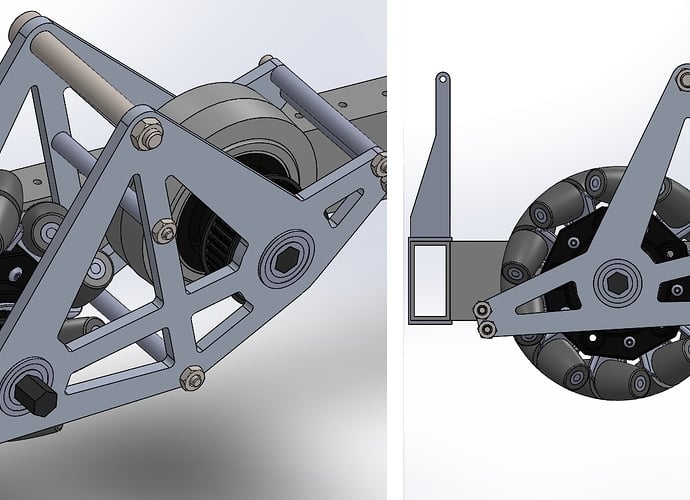 Here’s the updated version of the concept.
I took a lot of the advice from the last post and came up with this.
More stand-offs, thicker struts (at least 0.5") and a smaller wheel.

I did the gearing math for the drivetrain, and the mecaum is set at about 16 ft/s because that’s about as high as I could go without using an 18 tooth belt pulley to drive it.
The traction wheel is set at about 7 ft/s because that’s what I usually gear the low speed on our drivetrains at. Not sure if that’s still a good idea with this setup.
That’s a really large separation for two wheels which could be in contact with the ground at the same time.
I wasn’t sure if there would be major issues that arise from that big of a different or not?
I would anticipate at least some extra tread wear.

As for the piston mount on the left side, I realize it needs to be thicker. It’s primarily just to show the idea I’m going for.

Again, feedback and questions are appreciated.

Looking good! I wouldn’t worry too much about the difference in wheel surface speeds. If you use enough force to switch between wheels you’ll have almost no simultaneous contact.

A few suggestions from the top of my head:

You could probably go even lower than 7fps for your traction mode, although I doubt you’ll need it with a 16fps mecanum.
It will be tricky making that piston mount strong while keeping it high up like that, depending on its weight.

Looks much improved! It looks like the pod would be plenty robust (perhaps a little beefier-than-needed even), but I usually prefer to air on the side of over-engineered in the first iteration of a design.

Regarding the pod actuation, I would recommend - if possible - actuating it in such a way that you get a mechanical advantage rather than a disadvantage. In this case (with the moment arm from piston-to-rotation being shorter than the moment arm of actuating-wheel-to-rotation), you’ll need the piston to push with more force than 25-50% of the robot’s weight. Mounting the piston somewhat-vertically over the last standoff on the module would achieve a mechanical advantage, but frame integration is really only worse with that…

Does anyone on here have experience with cantilevered butterfly/octocanum? We’ve never tried cantilevering the axles on our butterfly (although we did consider it for maintenance reasons), but it might be reasonable… If you do it, I’d definitely recommend working hard to minimize the distance from your wheels to the main frame piece, and to make your frame as wide a box as is reasonable. The loading for a cantilevered octocanum/butterfly is a lot more intense than the typical WCD; you have the typical driving torque and weighted bending, but also the forces applied by the actuated wheel the piston when in traction mode are going to be powerful torques. Our shafts were simply-supported 1/2" tube shafts… I liked them alot, but we built it around a fully-enclosed sheet metal ‘tube’ that also housed the actuation pistons. They didn’t need to transmit torque because we had the CIMs mesh directly to a gear on the first wheel.

In the same vein as what Ty and Nathan suggested, you don’t need that much clearance between your retracted traction wheel and the ground, and you could use a lot more mechanical advantage to make actuation easier, so what if you mounted a shorter piston right above the traction wheel. This increases the lever arm and decreases the throw for both faster actuation and more mechanical advantage.

Play around with different setups like that and see what seems to be the best setup you can in that configuration.

As far as being cantilevered octocanum modules go, I feel like it should be fine, as long as it’s well-put together, and so is the rest of the robot (including bumpers). But I have no experience with it.

The traction wheel does not need to lift up that far. If you flip the traction and mecanum wheels around you could easily get away with a .25in liftoff distance (also, as previously stated, you get a longer wheelbase when you need it most). It will probably also be easier to pull the end of the traction wheel down instead of the module horizontally. You’re also likely on the traction wheel for a very short time so you could easily get away with a much smaller wheel (like 2.5 inches or less in diameter). That versablock is also getting cantilevered pretty far, I’d watch out for that. Hex bearings are infamous for breaking under those kinds of conditions (but have also been improved since I last heard that was a problem).

Does anyone on here have experience with cantilevered butterfly/octocanum?

We did cantilevered octocanum for our 2015 robot, in a similar setup to what is in this thread. We ended up popping the inner race on quite a few of those old Andymark bearings, so we switched to their new HD bearings. After that it worked fine through 2 regionals.
This is just anecdotal evidence though.

You should be good with having two different size wheels in contact with the ground since you are using belt which should be able to handle it. As others have said, you don’t need to lift the traction wheel up that far.

Does anyone on here have experience with cantilevered butterfly/octocanum?

We ran a cantilevered butterfly/nonadrive variant in 2014. Worked without issue throughout 8 different competitions, including as and against some of the heaviest defense at Championships and IRI.