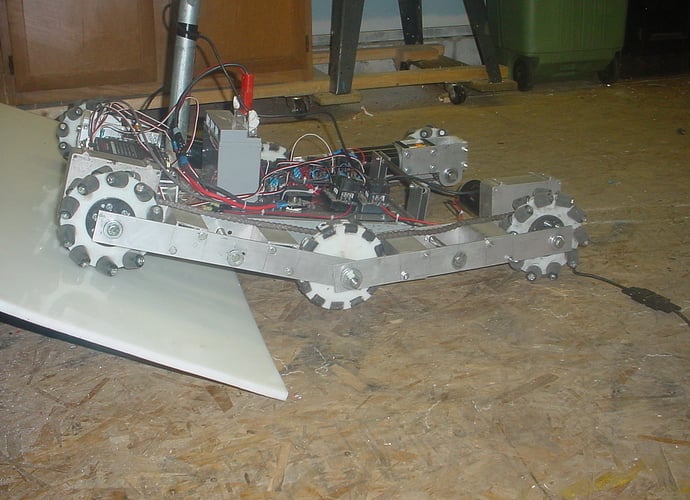 One side we used bain bot gear boxes and on this side we used kit gear boxes. This is just a proto type to see how different gear boxes would work. The easy way is direct drive from the gear boxes to the mecanum wheels. The mecanum wheels are home made and we used HDPE, rubber stoppers, brass bearings and 1/4 20 bolts. We lathed the plastic and than used a drill press on a 45 degree angle to make the holes and than a 1 in auger drill bit to counter sink the wheels.
Mecanum-Traction Hybrid Drivetrain
Hadi379 December 30, 2008, 11:04pm #2

I absolutely love the concept you have here. Just a few questions…

How flexible is it? Can it “bend” the other way? How far?

Yes it will go the other way, we can go over ramps. The main part of the robot does not move as far as the individual wheels due to the fact that they are attached to the center pivot poit of each drive unit. We are still testing if it will tipp when top heavy. Indications are because it can pivot about half way on the robot it tends to allow for the top to tip beyond what is normal. Maybe phnematics to control the suspension movement.

How does the control board move in relationship to the chassis?

I was wondering the same thing.

But I can’t seem to put my finger on a way to use the full length of the frame for the endeffector needed on the robot, if it so requires. Anyone have any ideas? The way it is now, you can in theory only use a half to mount anything on.

I love the design though. Me and RC call ours FlexDrive hehehe