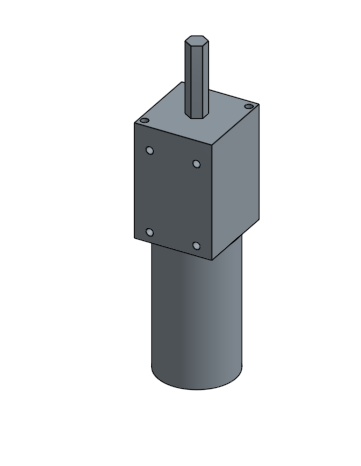 The Milkenknights love Versaplanetaries! Unfortunately, the way they interface in Onshape makes for some VERY slow-to-load CAD models and are very annoying to change things like motor, stage count, output shaft, encoder, and basically anything else one would want to make. Logically, (because what else would I be doing the night before my college apps are due) rather than making a parts database or using configurations I decided to make a Featurescript!

I programmed this Versaplanetary generator to function like an actual feature so if you want to import this into your actual Onshape toolbar: hit the plus on the right side of your toolbar (in a part studio) then paste the link below into the search bar and add the feature to use it with ease in all of your cad projects!
https://cad.onshape.com/documents/0d49969012476fe39d715479/w/f925fca45c9e331852f00941/e/3872d84357b941afee4bbdff

If you’re just curious or want to test it out, click the link (make a copy if prompted) and right-click to edit the feature in the left pane.

This feature is designed specifically to make changing essentially anything on a Versaplanetary easy, have VERY oversimplified geometry so it loads quickly (and because featurescript is hard- read my signature), and to simplify the process Onshape users deal with to import Versas.
In the next week or so I’m looking to add a few new features:

We plan on using this for the rest of our offseason bot and to speed things up come season, but if you find any bugs or have any other comments, questions, feedback, or will be using this on your team don’t hesitate to let me know in this thread!

Great Work! Its awesome to see features like this added to onshape.

Not an Onshape user, but definitely see the benefit! This looks great!

This is awesome, thanks!

Next time I have time, I’ll try and draw up a vaguely accurate representation of the CIM adapter in OnShape. You get halfway there just using swept surfaces. Doesn’t have to be perfect, though, as long as the thickness is right and it replaces the input stage you’re in the clear.