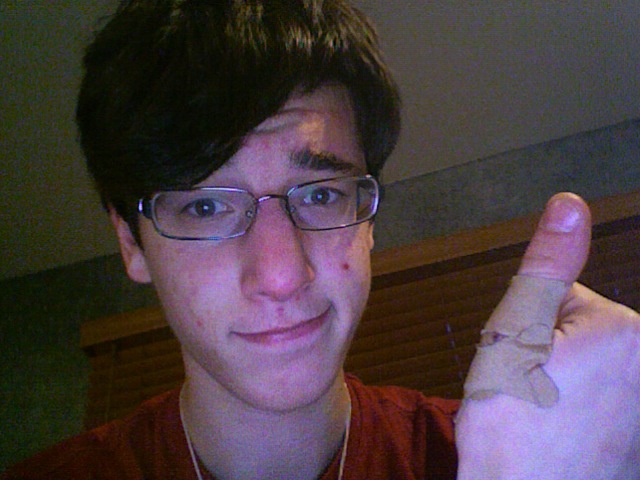 Now I can actually say I put blood, sweat, but not really tears into working on this year’s robot. XP

wouldn’t be the first time certainly wont be last.
At least you didn’t lose a finger to a roler chain.

Here’s to many more

last year i’ve lost a part of my thumb, Dripped blood all over the floor… it was kinda funny, wrapped it with some gazza and electical tape and kept working

A few years ago hubby was working in the shop alone and when he came in he was holding his hand and asked me to take him to the emergency room. He said he broke 2 fingers. There was no blood, it was Valentine’s Day and it was a Saturday night. I told him I would take him to an after hours not the hospital. Long story short…be prepared… he cut 2 fingers off. They reattached them but it isn’t pretty. :eek: They made up some new rules that year.

this one time a lil girl about 7-10 cut off almost her whole thumb an never cried crazy that wuz my friends lil sis wow i would cry like a lil baby:yikes:

this one time a lil girl about 7-10 cut off almost her whole thumb an never cried crazy that wuz my friends lil sis wow i would cry like a lil baby:yikes:

One would think, but adrenaline and other chemicals do strange things.

So, how did this happen?

well my story isn’t as epic as some of these, but basically, someone on the team had put the drill bit in the press WAY to tight, like it was nearly bending the bit. so I’m trying to get it out with the drill key, which slips out of place and my hand goes into the edges of the drill bit. i probably dripped a few drops of blood on the piece i was drilling, which is part of my minibot, so my bot will now bear the blood of its creator

Blood isn’t on the approved list of materials. Redo your whole bot! D:<

Unless you are willing to make your blood a COTS item… :rolleyes:

I had a similar thing happen also, but with a 3/4in endmill.

Pointy things tend to be sharp!

Perhaps the GDC will rule hemoglobin as an acceptable “polycarbonate glue”? In that case, it would pass inspection… ::ouch::

…or your robot has become self aware and dangerous to humans. “terminating” them one, by one, in their sleep

I’m fairly sure you could argue that it is a decorative item, if an inspector even bothers to question it.