pic: Our build site on Thursday 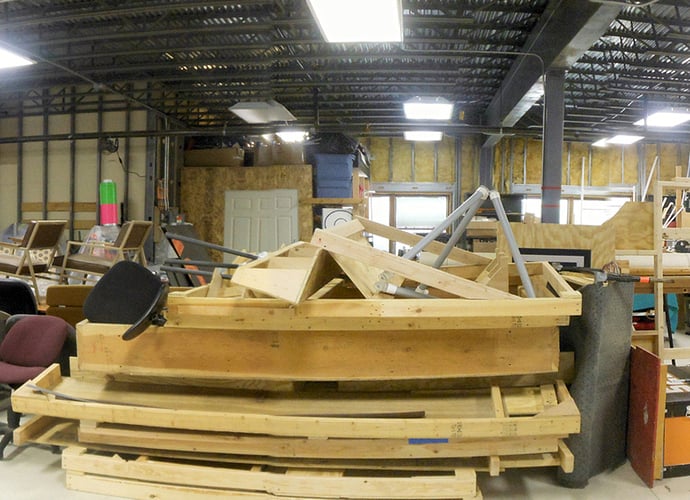 This is what our build site looks like now. We had to pack everything into a much smaller area - and we’ve got a lot of stuff. We have our last 10 robots, lots of old field and game pieces, tables and chairs we’ve accumulated. (It may be time let go of some of it - but not the robots.) We need to be move out by September 1st. So far no leads on a new location.
DominickC May 12, 2012, 10:26pm #2

Sorry to see you guys got kicked out of your build space. Good luck finding a new one!

Sadness. SWART Dogs are always and inspiration and it pains me to see such an amazing team in need. If there’s anything we over on Team 2410 can help with, just shoot me a PM

That could be fun…

I’ve seen fund raising events that featured a junker auto, at which donors were allowed to swing a sledge hammer in exchange for their donation. If you truly have unwanted material of reasonably good shape, perhaps a demolition donor session would work for you. Remember to film the proceedings if you do this. Just think “mythbusters” for inspiration.

That sucks! 68 had to go through that same situation a few years ago, but we luckily found a new (and our current) location.

I wish you guys luck finding a new location. Who knows, maybe it will open more doors than the lat one.

Sorry to see that, hope you guys find a place soon! and yes, I would agree with getting rid of your old stuff demo donor style; in the event that you find a build space which is smaller than your current space, having a lot less stuff would help. hope your luck turns

We have to demolish our field fairly soon after the end of each season. (There’s already a load of V-8 engine dunnage sitting where our baskets used to be.

I can’t imagine what it would be like to do 5 or 10 years worth of fields at once. Good luck with finding a new build site.

I can’t imagine what it would be like to do 5 or 10 years worth of fields at once. Good luck with finding a new build site.

We have bits and pieces of a few years - just enough that we can demo the robot from that year. We seem to attract the other stuff - like tables and chairs. We’ve been lucky in that our last three build sites have been good size.

We thought we were going to get a fourth year from our current build site so we really weren’t ready for the sudden move. In our 13 seasons (we were team 332 in 1999 and 525 from 2001 on) I think we’ve moved 7 or 8 times. At least one year we worked from the back of our team leader’s classroom.

We are excited to move into our new place this week.
http://www.chiefdelphi.com/media/photos/38213
It includes a 27’X40’ area with a high ceiling and about that much additional space with a 9’ ceiling.