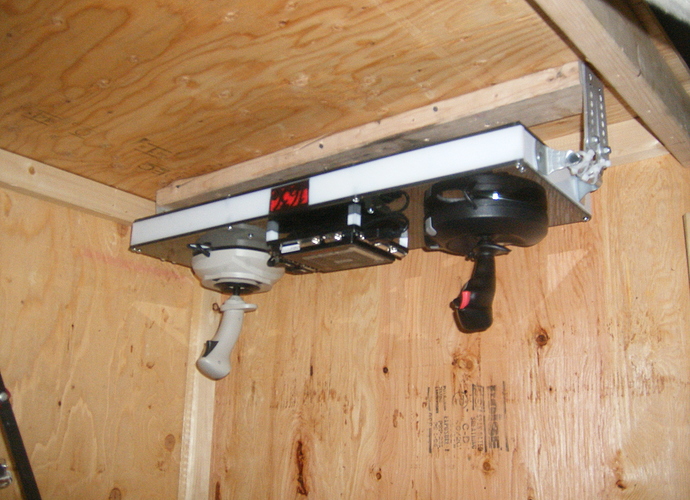 i hope you guys are ready to break down in tears after you open your crate at competition and its all destroyed because they drop the crate several times from relatively high spots (up to four feet from the ground is fairly standard it seems). I know I don’t want to have my team’s controls hanging out like that. Protect it to the max, saftey FIRST (saftey for the joysticks means better robot performance.

I would like to take a moment and cite an incident in the return of a teams robot from the championship last year. After returning from champs one day they go to school and there is the robot sitting outside the shop. no crate with the lexn sides of the bot ripped off. the shipping company had seran wrapped the bot to a pallet set the lexan on top and dropped it off at the shop, the team would nevr find out what happened to thier crate, now i dont think thats a good place for the operator console. Do you?

Ummmm yaaaaa, about that setup. Looks nice, but fedex, is kinda rough on the crates. They don’t do it on purpose its just the nature of things. You’d have a better chance of it surviving it being run over by a truck then ship it like that…

Yeah, I know…but it’s the set up our crate crew did and, well you can ask my team mates how much I was freaking out about the OI being there.

Yeah, I know…but it’s the set up our crate crew did and, well you can ask my team mates how much I was freaking out about the OI being there.

Show them this thread, and maybe it’ll change their minds.

As someone that used to pick up and haul crates all I can say is… HAHAHAHA you’al watch this …(as crate slides out of truck crashing to ground).

I hope that picture is upside down.

So, after the weeks after shipping the crate, the OI console was completely fine when it arrived at the Colorado Regional. (hopefully it can last the trip to Atlanta, it’s back up there.:ahh: ).

So, after the weeks after shipping the crate, the OI console was completely fine when it arrived at the Colorado Regional. (hopefully it can last the trip to Atlanta, it’s back up there.:ahh: ).

And every single post is about what could have gone wrong.

I’m praying for our crate. We were trying to stuff in everything we might need for Atlanta. We ended up wrapping half of our two-part crate seperately with packing wrap to try to keep everything in and off the robot. Even worse, one of the locks (it’s a metal crate) failed, and so the two parts of the crate are being held together by latches. The safety of our six weeks of work is in serious jeapordy.

As long as your controls are not trusting their life on a strip of Velcro than this looks reasonable enough to me. If the controls have to go in the crate I would prefer the bat imitation as opposed leaving it to a toolbox to come loose during transport.

I believe it’ll all be fine, my team was even swinging from the 2x4 during uncrating. Plus I doubled the amount of zip ties that’s keeping the OI to the hooks.