pic: Our design on the bump 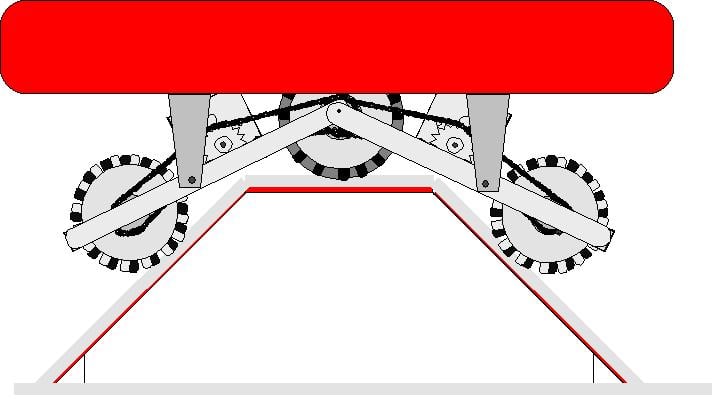 Looks like mecanum wheels? If so, I hope you have a differential on that center omni wheel, because that chain setup won’t work.

To provide scale, can you share what diameter the omniwheels are in this sketch? They look to be 8" wheels, and if that’s the case, it also appears that the bumpers are a bit too high.

I would also like to remind you to consider R25 (copied below). I am not passing judgment either way as I do not know your team/process/details of your design and I am a firm believer that each team needs to figure out their own interpretations and decisions. Please Carefully read the rules and make sure you feel you are not in violation with your design.

<R25> Prior to the Kick-off: Before the formal start of the Robot Build Season, teams are encouraged to think as much as they please about their ROBOTS. They may develop prototypes, create proof-of-concept models, and conduct design exercises. Teams may gather all the raw stock materials and COTS COMPONENTS they want. But absolutely no final design, fabrication, or assembly of any elements intended for the final ROBOT is permitted prior to the Kick-off presentation.

Example: A TEAM designs and builds a two-speed shifting transmission during the fall as a training exercise. When designing their competition ROBOT, they utilize all the design principles they learned. To optimize the transmission design for their ROBOT, they improve the transmission gear ratios and reduce the size, and build two new transmissions, and place them on the ROBOT. All parts of this process are permitted activities.

Example: The same TEAM realizes that the transmission designed and built in the fall perfectly fits their need for a transmission to drive the ROBOT arm. They build an exact copy of the transmission from the original design plans, and bolt it to the ROBOT. This would be prohibited, as the transmission – although fabricated during the competition season – was built from detailed designs developed prior to kick-off.

Example: A TEAM developed an omni-directional drive system for the 2008 competition. Over the summer of 2009 they refined and improved the control software (written in C) to add more precision and capabilities. They decided to use a similar system for the 2010 competition. They copied large sections of unmodified code over into the control software of the new ROBOT (also written in C). This would be a violation of the schedule constraint, and would not be allowed.

Example: The same TEAM decides to use the LabView as their software environment for 2010. Following kickoff, they use the previously-developed C code as a reference for the algorithms and calculations required to implement their omni-directional control solution. Because they developed new LabView code as they ported over their algorithms, this would be permitted.

Example: A different team develops a similar solution during the fall, and plans to use the developed software on their competition ROBOT. After completing the software, they post it in a generally accessible public forum and make the code available to all teams. Because they have made their software generally available, under the terms of Rule <R67> it is considered COTS software and they can use it on their ROBOT.

U-tube video of our test bot on the bump http://www.youtube.com/watch?v=jQMcw4QNCLI

We are installing new 8 inch wheels.

Per rule <25> All items are new, The orignal test bot used 2005 controller (not the ame code) The new test bot uses the default code and does not go sideways yet.

How do we make thease pictures smaller when posted?

Do I see a pneumatic kicker in your frame? And is that a 12" stroke piston?

Thanks for sharing these pictures!

I know… How do I make them smaller???

I know… How do I make them smaller???

That probably wouldn’t be the best method for referencing them in this thread. I’d suggest posting them as attachments or posting them to another image hosting site (tinypic is easy to use for temporary uploads) and linking to them.

Whats the feeling about <R11> with this type of frame?

Whats the feeling about <R11> with this type of frame?

The frame behind the bumper follows all the rules of <R11>. We are using the kit frame, the only difference is the drives are attached where the wheels would. Only the suspension articulates. When on level ground The bumper falls with in the 10 to 16 inch height requirments.

Nice picture, but if all the joints are pinned and the struts are rigidly attached to the frame, you are missing a degree of freedom. You may have to include a hinge joint between one strut and the frame.

Nice picture, but if all the joints are pinned and the struts are rigidly attached to the frame, you are missing a degree of freedom. You may have to include a hinge joint between one strut and the frame.

You can’t see it behind the bumper? I’m sure it’s there.