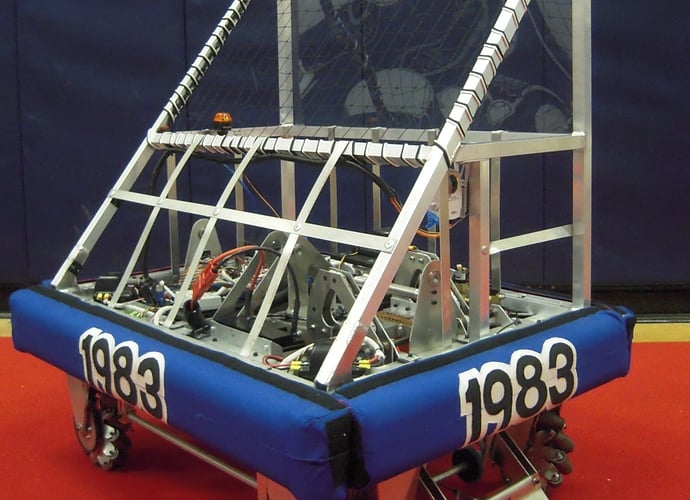 This is the Skunkworks’ entry into Breakaway this year.
Mecanum Drive, Ball Control, Kicker, Lifter (not shown in photo)
Large Ball deflector and Goalie Plate…

It looks like a fun year!!
Good luck to everyone and we will see you on the field!!

I see what looks like four kickers… but no “ball magnet”? Maybe you’re using something to handle the ball that I’m not seeing? Or perhaps that’s part of a witholding allowance project?

And “Lifter”… that sounds interesting… for lifting your robot or lifting others?

Guess we’ll see soon enough. Wish we could join you in Portland, but will see you a few weeks later at Key Arena. Go Skunks!

I had the pleasure of seeing this in person yesterday when we shipped our robot. It’s a beatiful machine from a wonderful team. The Skunks have inpspired our team to improve and be the best they can. Robert, you have built a great organization. Your robot shows the quality and commitment of your team. We look forward to seeing you in Portland and Seattle!

Thank you all for your comments. Team 1983 is inspired by your teams too.

We have a single kicker… (visible in the picture) It does have a 2 wheel ball magnet which is not visible under the bumper. The kicker is variable in kicking power… at present we have 3 distances which will need to be “tuned” in.
The ball magnet also has a ball sensor that can tell us when a ball is near…we hope to find that useful in autonomous…but of course we are still working on that. The mechanical team didn’t give the programmers quite enough time to get that tuned in…but then again… what programmer EVER has enough time to tune everything in completely… :0)

The lifter will lift our robot… we plan on hanging by moving up the bump and moving sideways into the tower… then a simple double hook will lift us …we have the gear box and shaft already on the bot… we are just working out the details of the two lift arm/hooks… This hook might also be able to lift us onto another robot as long as the bar we would lift from is the right height.

thanks for the compliments… we look forward to being on the field with you guys!!! Portland, Seattle and Atlanta!!!

any video of the bot going to be posted?

Looks like another great robot. I love the name, although I won’t say I wasn’t hoping for The Stench II, The Oder Lingers… Good luck guys, I hope to see you in Atlanta

Dave,
I tried to go with the Stench II… the sequel… but Pele’ le Pew just stuck…
and I think a bunch of the odor left here and went East to seek ‘its’ fortune at WPI…

take care
We miss you…