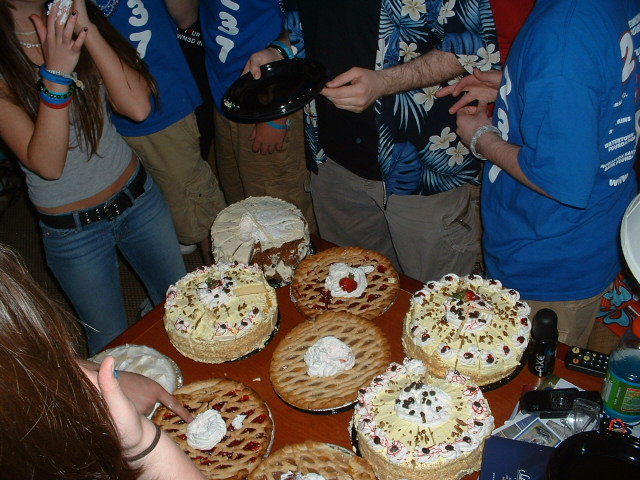 After the wrap party had ended, 237ers had tried to continue another tradition of taking the leftover sodas from the coolers for the hotel room after party as done in a couple previous years.

When we found out the coolers were already gone, Mike (our programmer extraordinaire) changed his green light seeking algorithm to seek something other than a cathode ray tube, and see what kind of other free stuff he could seek out.

This lead to a question and a chance meeting with the Pies from the VIP party and the staff telling him that if they weren’t taken, they were just going to get thrown out.

In true New England fashion, Mike came running to us excited of the news, and told us all about the situation, and we each grabbed a couple of pies.

Mostly made up of NERDS; us pie carrying fools made our way out of the park, across the street, and to the Omni, where some were brought to our room in the pic and some were graciously given to people who wanted some last minute snacks for the last night in Atlanta.

And the weirdest thing about it all was that no pies were harmed in the making of this stunt, and no one was pied in the face, no matter how tempting it was.

Interesting. I went to grab a dessert in the VIP tent at one point and there was only a small portion of a cheesecake left… (which was excellent, BTW). Somebody was holding back on the desserts! :ahh:

Oh man, that night was SO much fun. Surprisingly, we really didn’t even finish most of them. Even with giving a bunch away, and chowing down big bites – there was still a lot left. haha.