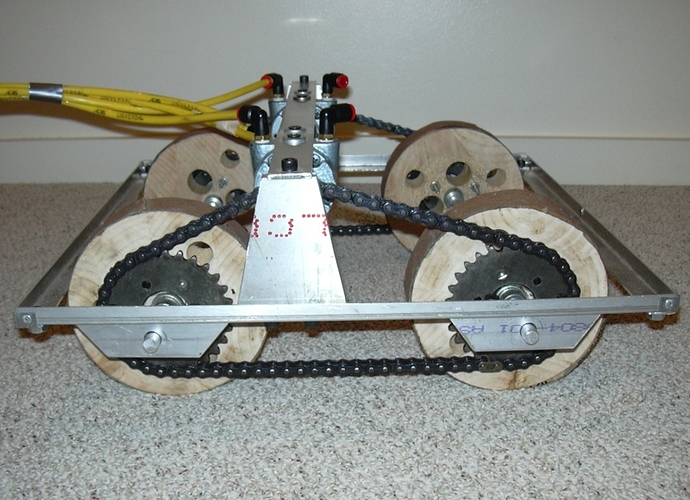 An off-season project of mine. For a pre-engineering class, we were required to build a 10 pound robot that could out-pull the other robots in the class on an 8 foot long tug of war field.
Since I could have easily snapped together a vex robot and called it good, I decided to challenge myself a little and build the vehicle from scratch…and on top of that, I discarded the globe motors supplied to me and substituted a pair of pneumatic motors.

The frame is out of angle aluminum, held with a some 1/4-20 bolts and some pop rivets. The motor mounts and axle mounts are 3/8 aluminum stock that I milled down and tapped for 1/4-20s. Wheels are made from pine boards, which I laminated together and turned on the lathe, sliced into segments on the band saw, and then hacked away at with the drill press. Power transmission is simply bicycle chain on some sprockets I salvaged from past year’s robots.

For two weeks work, this thing really works quite nicely. With the right controls, it can operate with tank drive steering (although it can be run simply forward with just an air source) It has speed to spare running off of 80 PSI, but the air motors really don’t put out much torque. Overall, its sure fun to drive around though.