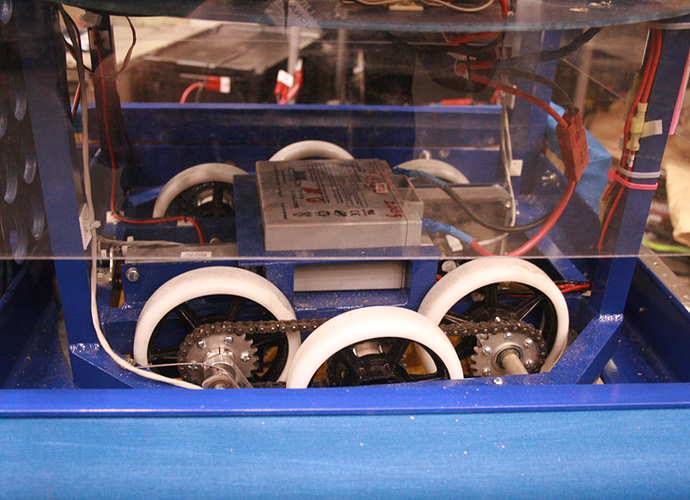 I would love to hear for 330 their thoughts on this very innovative drivetrain. Great new system, or soon to be forgotten?

I was hoping to see it in action, but I guess I will have to look for a video.

I also would like your opinion on your very cool and innovative drive.

I watched a video on TBA, http://www.thebluealliance.net/tbatv/match/2009nv_sf1m2, and it really looks effective, and keep 254 locked down on D.

Wow, it certainly was pushing well! 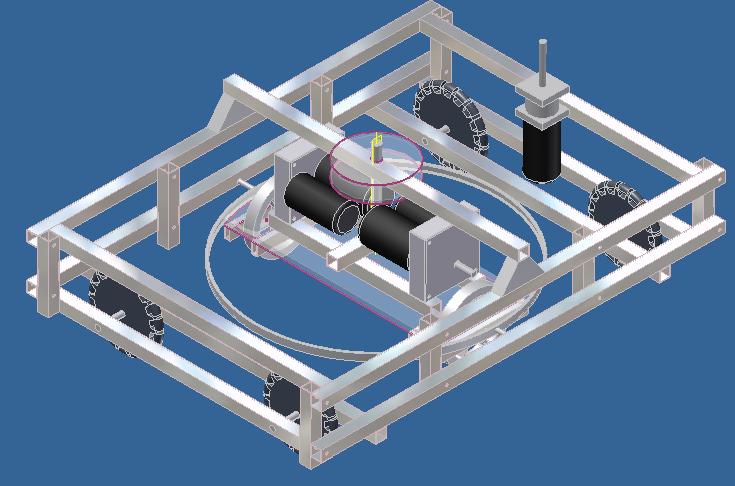 While Playing around with Autodesk, I’ve come up with a rough design for a unique multidirectional drive concept. Basically, the center platform and center wheels are on a powered turntable (chain driven from CIM in back.) The remaining four wheels...

I thought I had seen this drive type years ago.

I thought I had seen this drive type years ago.

Actually… it isn’t. That one (and the other link, too) have wheels on the corners. 330’s psuedo-crab has only 6 points of contact with the floor, and they’re all in the picture. Yep, 6 drive wheels, no corner supports.

I’m 90-100% certain that it won’t be used again, as it relied on one thing: the trailer. If the trailer wasn’t there, it would simply be a really, really big turret! With the trailer on the outside frame, it turned into a pseudo-swerve.

I can’t speak for 330 on their thoughts, as I don’t know said thoughts very well.

Ah, true. Didn’t think of that.

But that could also be effective, but more for offense rather than defense…
This year it could have been used in some situations to turret a dumper…

Here’s a response to a couple questions regarding details asked in this post.

With the current configuration, the drive frame is rotated by a BaneBot 545 motor in a 64:1 planetary gear box which is mounted on the octagon drive frame. A rubber wheel pokes out of the frame and picks up the outer ring of the turntable which is mounted to the external frame of the robot. The octagon drive frame sits on the inner ring of the turntable. You can see the rubber wheel at the back of the robot in this photo: http://www.chiefdelphi.com/media/photos/33368

The setup is a standard 6 wheel drive setup, inside the powered turntable. Both sides are controlled separately. Since the planetary gearbox is not easily back driven, the robot drives like a normal 6 wheel drive when the 545 motor is not powered.

Alternatively, we can take off the rubber wheel and then that “frees” the 6 wheel drive (disconnecting the 545 motor with the external frame), allowing it to rotate within the external frame under it’s own turning force. This is how the drive was originally designed, because it allowed the drivers to drive the robot without having to worry about handling the trailer appropriately. If the drivers wished to go straight back, they could do so by simply backing up, and the trailer would move out of the way without any effort. Essentially, you could drive straight through the trailer. However, with this configuration you cannot point the upper portion of the robot. As the robot went through design phases, the requirements for the drive changed. Once we settled on picking up off the ground and having a stationary (relative to the external frame) dumper, we needed to control the external frame, and added the motor which powered the turntable.

Although the 545 motor does create an indirect link between the trailer and drive train (thus restricting turning), this is still overcome by the driver. When the turntable is spun and the drive is rotated at the same speed in the same direction, you get virtually the same “free spin” effect, as you would without the 545 motor attached. This allows you to drive straight through the trailer again.

Throughout our season we were happy and satisfied with how the design performed on the field. Although this drive did make picking up balls off the ground more difficult (especially with the narrow-side pick up), the main benefits allowed us to win some vitally important matches. With its point-and-drive characteristics and traction control, it was a prime robot for playing defence and shutting down a high scoring opponent. Once pushing against an opponents robot, it was nearly impossible for them to get away. We could stick like glue and push them sideways around the field. If they did get away, we could cut them off during their escape (as seen in the video above).

The drive also allowed us to escape when getting pushed, so that we could go and score. We could drive the base in the direction of travel, gain speed and separate from the pushing opponent (or reduce enough force between bumpers so that the friction levels were small enough to become “unstuck”), then change direction to go free. When pinned against a wall, we could angle our driving force in which ever available direction allowed us to break free.

In several cases where the opponents trailer was close by, the base allowed us manoeuvre to it for some last second dumps.

As Eric mentioned, this drive was designed for handling the trailer and low traction surface, so it’s not likely to see this drive in use again, at least for this specific purpose.

Overall we were satisfied with the drives performance, and wish we could have made it to Atlanta. We have every intent on making it to IRI, and are greatly looking forward to it.