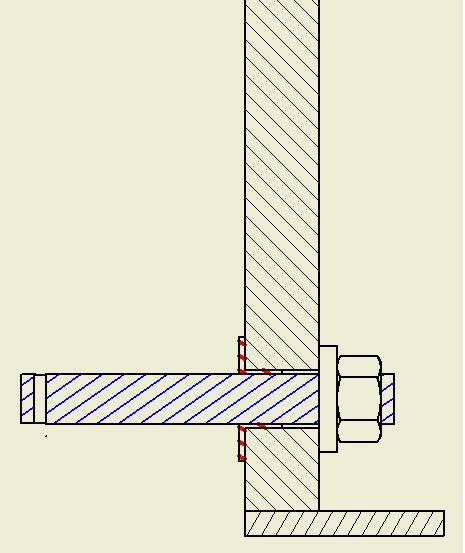 This is how we plan to mount the axles in the chassis shown and discussed here.. The red part is a T-nut that is hammered into the outside of the frame rail and has 1/2 inch threads. The blue axle is just a long 1/2" bolt that has had the head cut off, and a hole drilled for a cotter pin to retain the wheel. The axle is threaded into the t nut and tightened in place with a washer and a nut on the inside of the frame member. This is a very similar method to what we used last year, but with more material directly supporting the axle. A video showing the strength of the frame can be seen here.
gorrilla January 1, 2019, 12:07am #2

any other reason why you cut the head off of the bolt besides allowing the replacement of the wheels quickly?

that does look really sturdy now that i look at

We cut off the head because most bolts that are long enough to be used for an axle only have threads on the last inch or so, which would require the head to be on the outside. We didn’t want to have to unscrew our axles every time we need to remove wheels, and cutting the head off iseasy and quick.

FYI, you can get bolts that are threaded to the head, even several inches long. They are specialty fasteners but available.

I know that you are going to test this design before you use it, so I’m prepared to be proven wrong, but my “gut sense” is that this design may be prone to failure due to the repeated hammering on the axle as the motors shift from forwards to reverse.

Keeping the sprocket as close to the wood as possible should minimize the effect of torque, but I think you could do that even better by gluing a second thickness of plywood around the axle hole. In fact, I would be tempted to drop down to 1/2" plywood, then reinforce the axle mounts by gluing a piece to each side to help distribute the stress, but more importantly increase the lever arm between the t-nut and the nut.

In fact, I would even go so far as to suggest that laminating up the side rail out of thinner pieces of plywood would allow you to control the cross section, weight and stiffness of the side rail along the length of the robot… however that might be getting away from the “quick and easy” aspect of this design.

I would also be tempted to consider replacing the t-nut with something larger and, perhaps, a bit stiffer. I’m thinking of a tapped aluminum bushing in the shape of a t-nut, but with 1/8" walls and flange. The bushing could be epoxied in to the wood (knurl the outside for a great grip) and then the flange could be screwed in to the plywood as well. Again, this gets away from the “quick and easy” and requires access to a lathe and tap a bit, but even though I really like to see wood used in designs, I’ve got some concerns about whether the design proposed here will be able to handle repeated cycling and impacts.

On the other hand… I may be underestimating how well this set up will distribute the load. Good luck with the testing!

I know that you are going to test this design before you use it, so I’m prepared to be proven wrong, but my “gut sense” is that this design may be prone to failure due to the repeated hammering on the axle as the motors shift from forwards to reverse.

Keeping the sprocket as close to the wood as possible should minimize the effect of torque, but I think you could do that even better by gluing a second thickness of plywood around the axle hole. In fact, I would be tempted to drop down to 1/2" plywood, then reinforce the axle mounts by gluing a piece to each side to help distribute the stress, but more importantly increase the lever arm between the t-nut and the nut.

the only problem I could see, is the t-nut loosening after awhile(by the upward and downward motion), but thats an easy prevention…

We couldn’t install axles this way yet because we are still witing for our T nuts, but we drilled the holes and mounted the axles using regular 1/2" nuts and large flat washers, which seems like it will work fine.

The advantage of the t nuts is it lets us mount the sprockets as close to the frame rail as possible (we plan to use bearings in the sprockets to keep them concentric, making tensioning easier on a single chain run). I don’t think the T nuts will have any problem, they are supported by a lot of material, and will be held in very tight by the nut inside the frame.

EDIT: After discussing the design with my dad, I see how the axles might loosen due to the wood compressing. We might want to do a test by mounting an axle and putting a large torque on it with a lever to see if it loosens or gets damaged.

Like I say, I may be understimating the way this design distributes the force. Or I may be overestimating the forces involved in slamming the robot from full forward to full reverse. Testing will tell, and I know that the 1726 team will definitely be testing this before they commit a competition season to a particular axle or chassis design.

I guess when I look at it and doubt whether the mounting system is strong enough, then what I am also thinking is that if the mount point is strong enough, then the rest of the side rail is massively overbuilt. Not a big deal if your team traditionally doesn’t have an issue with the weight limit, but last year was the first year that we didn’t end up “speed holing” the last few days before ship day. We’re a bit paranoid about weight.

One of my model airplane building friends once described his theory of figuring out how strong to make a model airplane (where weight is also a big issue) as “Build it and test it. If it breaks, make it stronger, if it doesn’t, make it lighter.” In this case, if the wheel mount point holds together, then there are definitely some weight savings to be had in the rest of the plywood.

I know this is described as a “quick, affordable” wood chassis, and now I’m starting to talk about weight, which is not one of the two primary descriptors, but it is relevant to any FRC chassis.

I’m looking forward to hearing how the testing goes… the frame itself looks good, both in design and in the video and I will be pleasantly, but only slightly, surprised if this mounting system holds up to repeated start/stop forward/reverse cycles.

Thanks for your comments, it sounds like you have a pretty good understanding of the design and it’s advantages and disadvantages.

Weight is always an issue, but we think that a 13 lb bare frame is pretty competitive with other designs. We also like to keep the weight down low, so we go to extra trouble to make the stuff “up top” as light as possible, and generally don’t worry about carrying some weight in the chassis. Plus the added thickness of the side rails gives it quite a bit of extra torsional stiffness.

We want to get some transmissions and motors and chains on the prototype chassis right away when we get the KOP, and see how it handles driving.

There are lots of different ways to build a wood chassis, this is just one idea. Other suggestions are welcome!

My only suggestion would be to use a larger washer under the nut, such as a fender washer. This would spread the stresses over a larger surface area of the wood and reduce some of the stress on the T-nut.

on monday im taking mine to our rookie team,
and we’re going to put the new control system in it, along with two of the old minibike motors, hopefully we can get some wheels and get it driving…