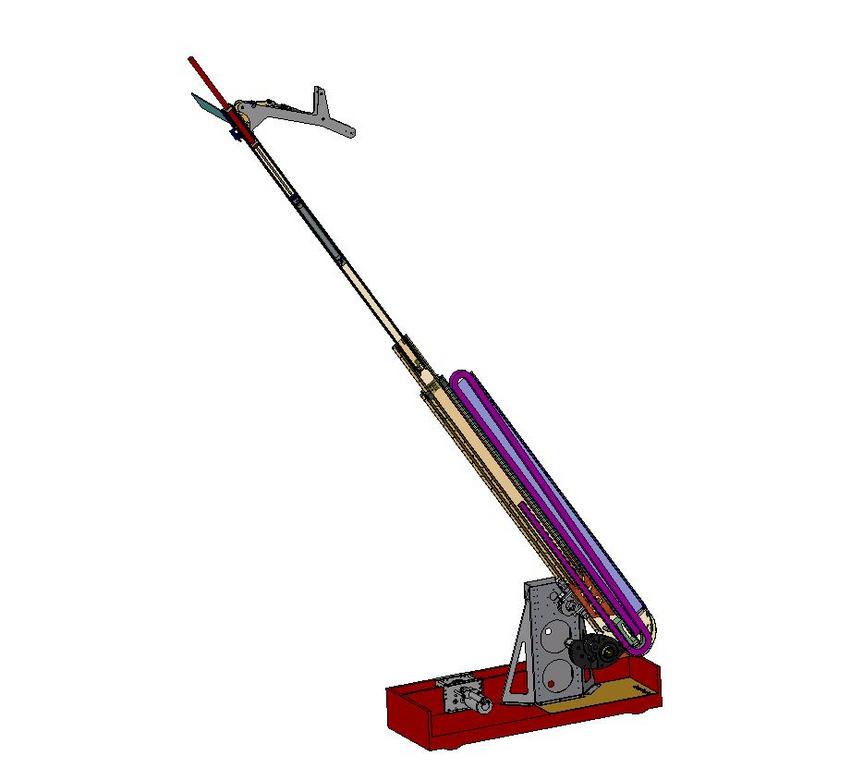 If Rage isn’t using air or cables or chains, how do they extent their arm in 4 seconds to 12.5 ft???

Maybe the picture will tell us.

I think you’re pulsing electromagnets to slide the arm.

I think you’re pulsing electromagnets to slide the arm.

Nope, that would be nice though…

It looks to be something similar to the tape measure extension mechanisms seen last year or the mechanism used for a car antenna. A flexible, or at least flexible in one axis so that it can be coiled member with an OD only slightly smaller than the ID of the tube its in is pushed. The tube supports it to prevent it from buckling. It looks like that purple thing that folds back twice is this member. If I’m right, I’m curious what exactly it is.

EDIT: No, I’m stupid, this is not the mechanism, or at least the purple thing isn’t the extension member because it isn’t extended but the arm is.

The wireway was modeled in the retracted position, and sized to fit. Then, to show this view, the designer decided to extend the arm without making the significant effort to model the wireway in an extended position.

At least, that is how I see it.

But… on to the topic at hand… this is a great design. I am excited to see how it works, and will be eager for a up close view in Atlanta.

Ah, so I’m right, or at least Andy Baker thinks so. And I had thought it was a wireway, too, though I didn’t know what it was called. (I have seem the same stuff sticking out of a CNC machine at the place I intern at.) I’m also very interested in seeing the real thing. I have always thought this design is underused. Seems like such an effective way for powering a telescoping device.

Ah, so I’m right, or at least Andy Baker thinks so.
Yes, you are right.
I saw it at the UTC scrimmage… I had never seen anything like it before.
I would have posted the answer, but I didn’t know the stuff was called “wireway”…I learn something new every day I guess.

Nice job RAGE, your bot looked great at UTC! That arm is fast and moves nicely.

heres the links of it running.

judging by the coloring, it sorta looks like a light saber, so i’d say the force.

Okay…
This is THE COOLEST FIRST design I’ve seen in a long time.
I was shown this on Thursday at UTC, and have been smitten ever since.

For those who haven’t seen it yet – RAGE actually uses the cable carrier to extend and retract their arm. I won’t steal ALL their thunder, and post the details – perhaps Triggs can enlighten everyone.

It is SPECTACULARLY cool. Soooo smooth, soooo simple.
After fighting with cable/pulley’s last year for our extension, I am AMAZED by how simple and effective this is.

The best part? It manages their cables/pneumatic tubes WHILE is drives the arm!

Seriously –
This entire robot is a work of art. The sheet metal arm design is one of the best I’ve ever seen on a FIRST robot. Combined with their great end effector, and this innovative extension, it is truly an incredible machine.

RAGE–
Kudos on an incredible machine. I was SHOCKED when you didn’t win a technical award at UTC. You’ve definitely inspired me. (Not always a good thing!)

Everyone Else–
Go check this thing out. Seriously, if you get the chance, take some time to go visit 173’s pit. It is worth taking a walk over.

Could somebody explain this contraption? I haven’t the slightest idea what the picture is showing. :eek: What I’m hearing is that it’s better than a winch, and that’s definitely something I’d like to hear about. And how does it manage the pneumatic tubing and cables?

Thanks John for the complement !!!
I was very shocked we didn’t get a design award. With in our peers we were picked first for an Alliance partner. This was our goal, because the qualifying rounds have too much luck involved with them. I was very happy to take 2nd place in the UTC regional. We have one more regional and then the national to show at. So maybe we can pull out a win somewhere. But all of our goals for design were met and went a little farther then we expected. For next year if theirs lifting to do again you’ll definitely see this unit again.

Ok the design is all based around an item I use all the time at work. Its called cable chain, others call it wire way, or cable way. Cable chain was designed to have cables and hoses run through it. The chain is then connected to a stationary object and the other end is attached to an object that moves back and forth. As the moving object goes from one end to other the chain either unrolls or rolls back up. This is all the product was designed to do. The chain has this other property that the chain is stiff in one direction and the other the chain rolls up. Kind of like a Fat Max tape measure rolled out correctly the tape measure is stiff. Flip the tape over and the tape falls. This concept allows the tape measure to be rolled up. So I said if I can feed this chain into a set of telescoping tubes with a custom drive sprocket I can push the tubes out and pull them back in. And a bonus is I can run all the pneumatic lines and sensor wires right in the chain making a very clean setup.

We were very afraid the chain links would not take the pushing stress. So we prototyped an arm with the chain I wanted to use. As we ran the prototype we were all like this is the greatest thing since sliced bread. No more wire cables and pulleys or camper lifts.

Unloaded our arm can rise a total from ground to the end 13 ft in 4.8 seconds. Now we found at UTC you never have to reach that high most times its only about 10 to 11 feet.

The arm is made of 1/16 aluminum that has been laser cut and cnc bent. All sections of the 1/16 material took up a 4’x6’ sheet. A smaller tube was put on one side of the telescope to collect the cable chain it was made of 1/32 aluminum. The whole arm with motor and end affector weighed around 23 lbs. This gave us a great center of gravity. We have never tipped the machine over in competition or practice.

I offer a challenge for next year for some team to use this method. A Company called Igus makes the chain. Their on the web. It sure beats the making all those pulleys up.

I offer a challenge for next year for some team to use this method. A Company called Igus makes the chain. Their on the web. It sure beats the making all those pulleys up.

This makes sense to me. If we do a telescoping arm in the future, this is the direction I would like to go… we would call it a “Rage arm”.

Great job Rage, and thanks Triggs for showing to us.

Igus makes lots of interesting stuff. We got them as a sponsor this year so our entire telescoping arm is made out of 6 sections of their linear bearings. The stuff is awesome, smooooooooooth, and cantilevering a 12 lb tetra 4 feet out doesn’t bind it up too much.

very impressive. Cant wait to see it in person at Annapolis and Atl! Hopefully we wont be the victim of it. Better yet, hopefully well be on its side(whadda ya say to pickin us for the elims? :p)

Okay…
RAGE–
Kudos on an incredible machine. I was SHOCKED when you didn’t win a technical award at UTC. You’ve definitely inspired me.

Awards are nice to win and I also thought the design was worthy, but praise from peers is more valuable… thank you. It’s been great to have Bob re-join our team as one of our engineers (he’s a RAGE alumnus) - we are so fortunate to have such a solid base of engineers assisting our students with brainstorming and design and building the robot.

Everyone Else–
Go check this thing out. Seriously, if you get the chance, take some time to go visit 173’s pit. It is worth taking a walk over.

If you are not going to Chesapeake or to Atlanta, but are in the Hartford, CT area, give us a call and we will have Bob or someone from the team explain this awesome machine. (I think even I’ve been able to figure out how it works!)

With Triggs’ permission, I will put up pictures and video on the website of it all.

Very innovative. Never thought of using wireway in this way. Can you explain or show in a pic how you are driving the wireway in and out. I am not clear on this.

We use a custom made lexan sprocket driven by a Fischer Price motor, of which we have only burned up one and that was on Friday at Chesepeake, because we had a bad speed control or something like that, and the motor stalled and burned up. But I will try and get some pictures up on our website sometime in the next week or so, but currently I have been really busy and unable to do so.

We use a custom made lexan sprocket driven by a Fischer Price motor, of which we have only burned up one and that was on Friday at Chesepeake, because we had a bad speed control or something like that, and the motor stalled and burned up. But I will try and get some pictures up on our website sometime in the next week or so, but currently I have been really busy and unable to do so.

This is how the 2005 RAGE arm works, it is hand driven in this video, but you get the basic idea.

Sorry about the double post but I was unable to edit my previous one.