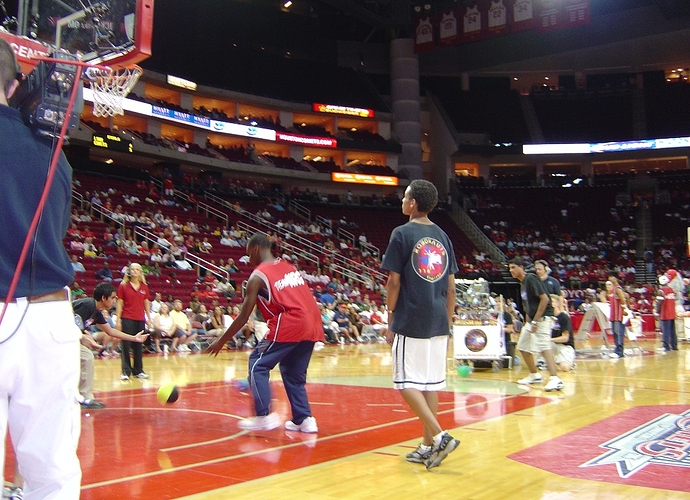 What’s the story behind that?

Did you have the green target above the hoop, or did you just aim very carefully?

In the continuing effort for Texas teams to expose every corner of the Lone Star Region to robotics and engineering education, the Robonauts’ Magnum made an appearance at a WNBA Houston Comets game recently to shoot some 3 pointers with the ladies.

A short video of “string music” can be viewed at www.HoustonRobotics.org. Magnum shot in manual mode although he had some thoughts about using the camera to track the shot clock. During the 45 second demo, Magnum made a handful of shots. During practice, Magnum made anywhere from 5 to 15 shots in 45 seconds and could sink shots from almost half court.

It was a lot of fun for everyone involved. Hopefully this is just the beginning of many, many high school, college, and NBA basketball half time robotics education demonstrations around the country from all the great shooters that were born during the Aim High challenge.

Has anyone won the NBA Krispy Kreamers Challenge?,
Lucien

Wow, they let you drive on the actual court? We get worried about our wheels just in the hallways at school.

That is definently cool! i dont think are janitors would be very happy if we did that in our school even though it looks like so much fun!

We did the same thing but on a little lower scale at a recruiting trip to our middle school. We sat at about half court and some of them were nothing but net and others were off the back board. Our shooting percentage wasnt too good though because of the speed of the wheel and such but it was fun anyway.

We tried it in the gymnasium at our high school during the build season.