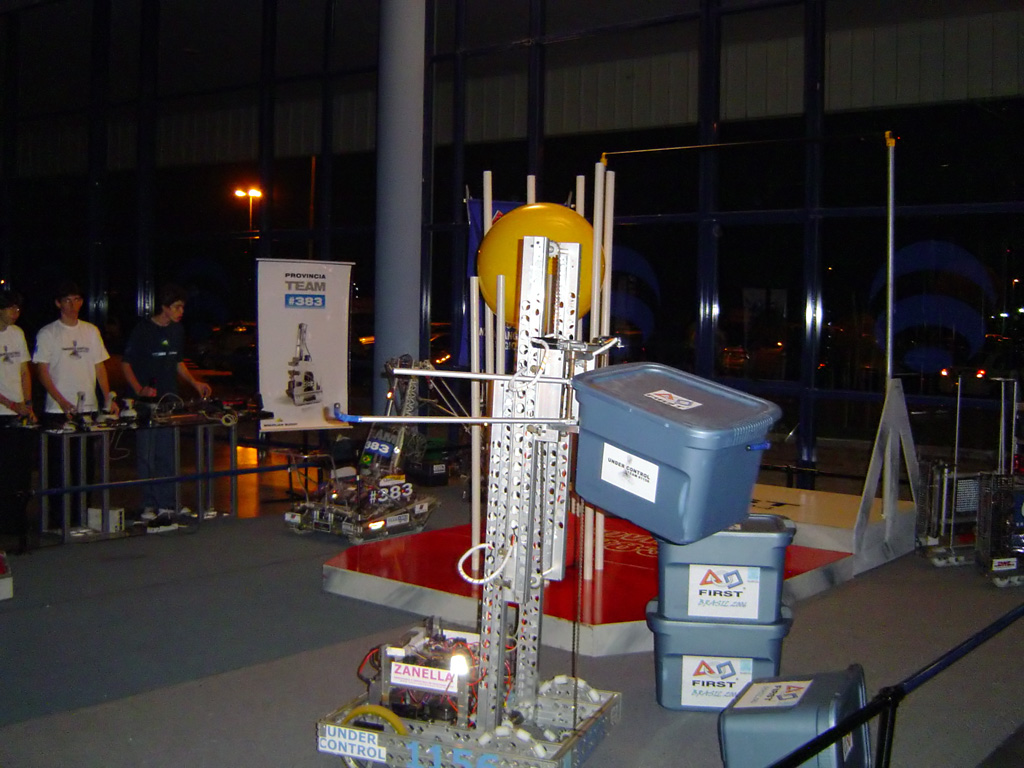 Team 1156 stacking bins and team 383 getting ready to hang at a statewide event that took place November 17th, with an audience comprised of pretty much ever VIP one could expect.

It looks like this field is having an identity crisis.

And more importantly, what was the object of the game?

i have an urge to say stack totes on the robot that is hanging?

And more importantly, what was the object of the game?

Since there were so many VIPs around I would guess the object is to get more sponsorship, but what do I know? :rolleyes:

So how is this for a new game:

So how is this for a new game:

FIRST could go crazy one year and compile all of the themes and ideas of previous games into one mega-game, but that would drive many teams over the edge into insanity (but it would be fun)

FIRST could go crazy one year and compile all of the themes and ideas of previous games into one mega-game, but that would drive many teams over the edge into insanity (but it would be fun)

That’s EXACTLY what FIRST did this year.

That’s why in my opinion the 2004 game was so awesome.

Let’s see if they can outdo themselves and “Raise the Bar” even further on this competition in 2005. :]

Actually, you were confused because you didn’t get to see this picture, you can see that we actually brought our robots from 2001 to 2004, and so we had plenty scoring objects in the field

On the picture discussed in this thread is team 383’s 2004 robot and team 1156’s 2004 robot, adapted for last year’s game - not sure why, maybe someone from their team could clarify.
A more complete explanation of the event is also presented in the picture I linked above, but here it is:

*“Teams 383 and 1156 setting their robots up to be presented at the launching event of 2005 Globaltech.
Globaltech will be the largest Science and Technology event in Latin America, and FIRST couldn’t be left out of it.” *

To Alex469, yes, this is team 383’s practice field (actually, just half of it). We couldn’t buy the HDPE sheets as large as we needed, so we had to use stickers to make the platform look good. Friction is very different, but you have to deal with that sort of stuff when building a robot a few thousand miles away from the great majority of the teams.

That explains why it is so “shiny” and how we managed to put the school’s name, team number and FIRST logo on it.