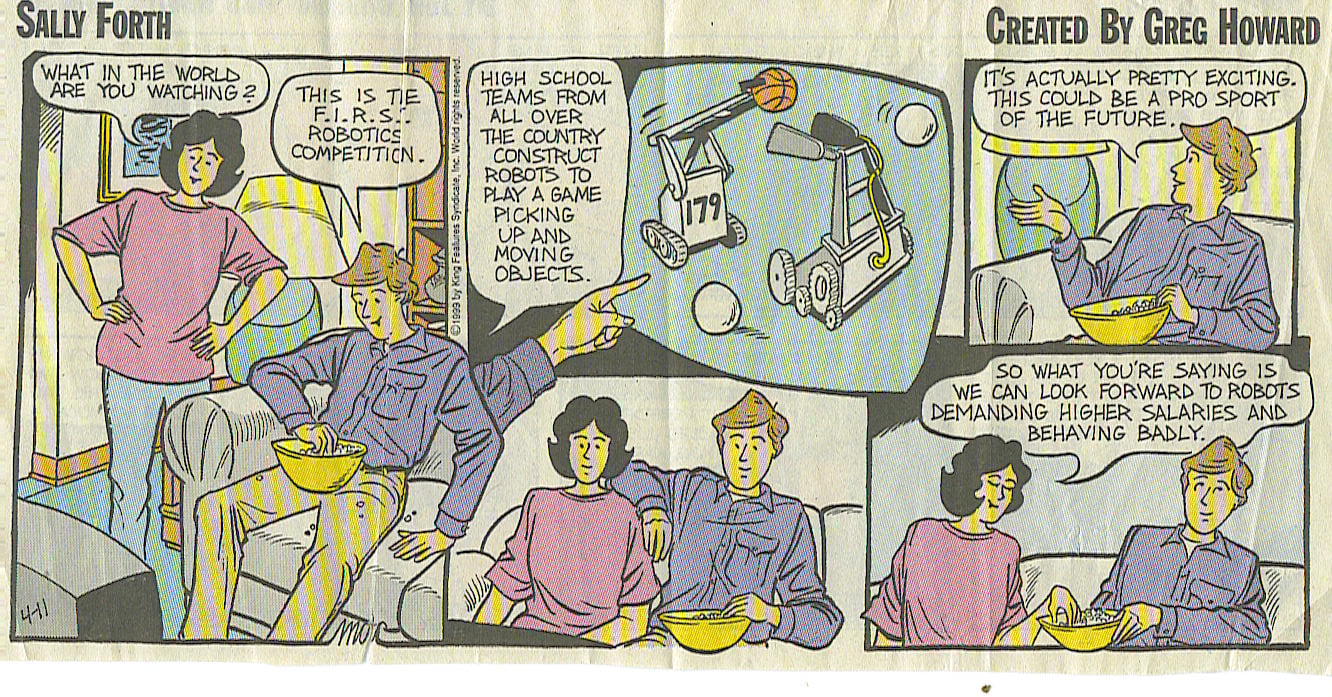 I cut this comic out after my first year in Robotics. I was so excited that it was so famous. Please note what team number is shown

The following thread (one of this thread’s related threads) implies that is 179’s robot.

FIRST Comp in the Sunday Comics!

Posted by Thomas A. Frank, Engineer on team #121, The Islanders/Rhode Warrior, from Middletown (RI) High School and Naval Undersea Warfare Center. Posted on 4/10/99 6:05 PM MST Hello All; Check out ‘Sally Forth’, by Greg Howard, in this Sunday’s...

Woah! that is awesome, I never knew FIRST was ever put into comics, nice find.

There was an additional comic strip where the couple discuss FIRST as the husband is watching it on TV and the wife is folding laundry.

If I recall, the guy who did Sally Forth at the time used to post on here, occasionally…

Dean Trivia: Dean has a blown up version of this comic hanging in his machine shop, right by the entrance to the room with the sandblaster.

If I recall, the guy who did Sally Forth at the time used to post on here, occasionally…

Yeah, I was thinking it had been a while… Didn’t he offer a signed strip or something like that as a prize for a contest, once?

I have that comic hanging over my desk at work-

Wasn’t Anton Abaya associated with them?

I never noticed the date on it though!

The FIRST related Sally Forth comics were written by Steve Alaniz. He was the Electrical Engineer mentor for team 57. He moved to the UK in 2002, this year he started a rookie team in Britain. Team 1884, they competed at the Lone Star Regional this year and did well.

As for the nod to 179, don’t read to much into it. the original printing of the comic had the title picture with 57’s robot from that year.

This is awesome. I always love references to FIRST in media. Now what would really be amazing would be to get it featured in some prime time show (Simpsons and Family Guy come to mind because they are animated and do not need real footage other than for reference). Can you imagine how many people would see that? It would really boost the number of people who know of the existence of FIRST and maybe even increase the number of students involved.

I didnt know about the one in this thread, but am well familiar with this one from 2001:

The FIRST related Sally Forth comics were written by Steve Alaniz. He was the Electrical Engineer mentor for team 57.

, anyway thats really cool, if only there were more comics on FIRST

That makes me so happy. It really is exciting to see that FIRST IS so out there. I wonder how many people read that and said, “What the heck is FIRST??” haha! But it really is ggggrreat!