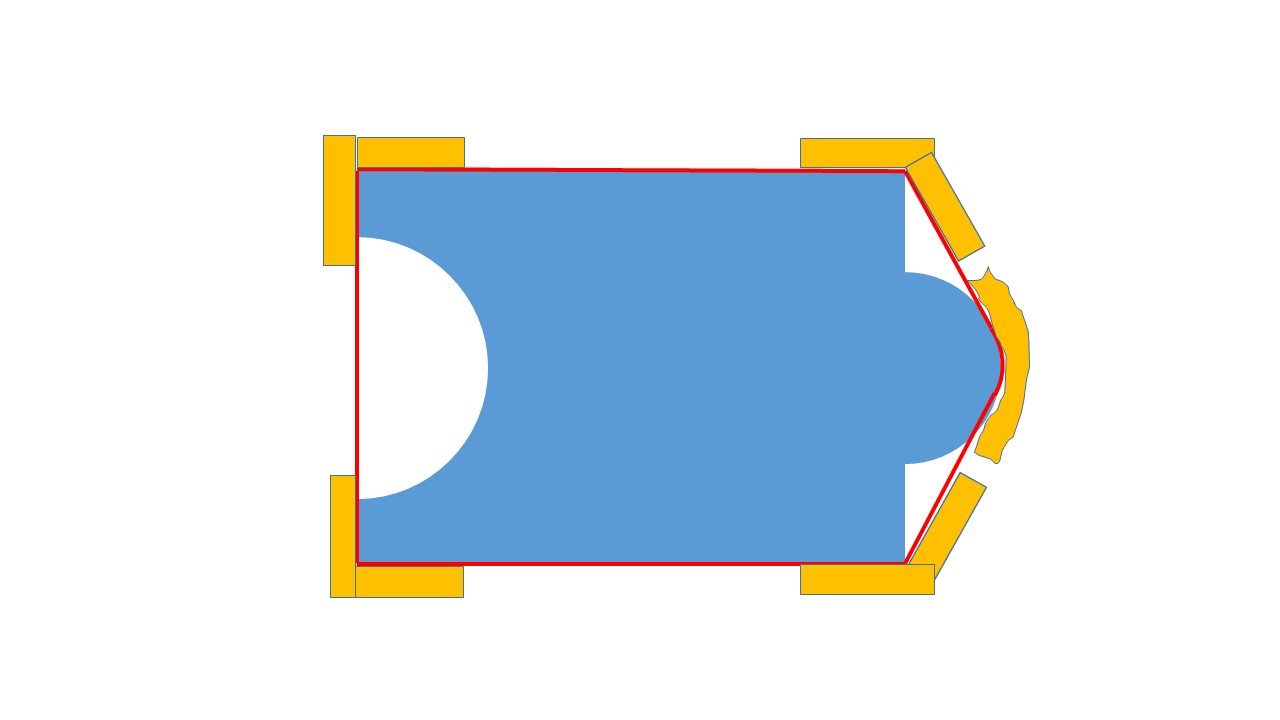 I figured I’d (try to) clear up the Frame Perimeter for teams.

Blue: The robot
Red line: Frame Perimeter
Yellow: Bumpers. They are intended to show where bumpers would go; however, they should be considered illegal due to lack of supported ends. A smaller cutout and some superstructure hanging down might fix those problems, though.

This is not intended to represent any robot at all, let alone my team’s.

Good visual sir, I think that this will help a lot of teams see what is meant by the frame perimeter.

(Assuming that you are referring to the cutout on the left side)
Yes indeed, there must be at least 8" of fully-supported bumper extending in each direction from every corner of the “frame perimeter”. As such, the left side of this robot is illegal as shown because the bumpers are not fully supported.

(Alternatively, if you are referring to the protrusion on the right side)
For the purposes of determining the frame perimeter, any convex curve is considered to have an infinite number of corners. Therefore, the middle of the curved section on the right side must be completely protected by bumpers, and the final “corners” on this curved segment are defined as the two points where a string wrapped around the “frame perimeter” loses contact with the curved segment. Looking specifically at the top right diagonal section of the “frame perimeter”, then, the 8" minimum (fully supported) bumper measurements begin at both the top right corner of the rectangle and the point where the “frame perimeter” loses contact with the curved segment, and extend inwards from there. Unless the total distance between these two points is greater than 16", there won’t be room for a gap there at all!

Good diagram Eric!
Its too bad the total frame perimeter this year is limiting which doesnt allow too many rectangular configurations that will meet the corner 8" rule and size of the ball. And yes, there is the over the bumper mechanisms…but still.

Skywalkar got it right. Actually, the bumpers on the left side are “theoretically 8” + overlap" long. This is a common problem that many teams will face this year–bumpers not supported at the end when they have to rebuild them to make the length.

Just as a note, I actually did this one as a response to the collective community forgetting of the difference between “Frame Perimeter” and “What My Frame Looks Like”. It was not intended to be a legal configuration, and that is specifically noted in the description. Now, if somebody shows up at competition and their robot has similar problems… let’s just say that they’ll be doing some rework.